Q & A with Andre Agassi 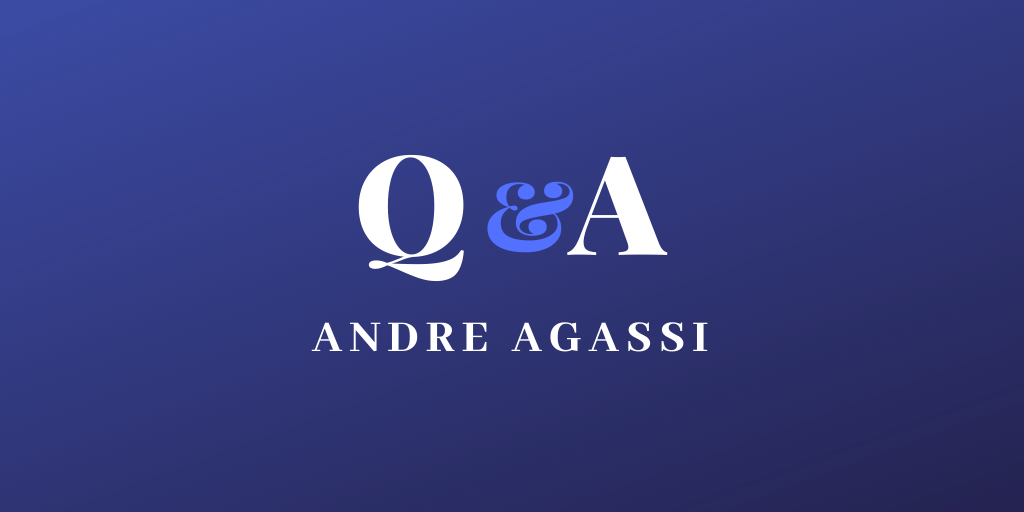 For 52 years, the Washington Tennis and Education Foundation has been keeping local kids off the streets by providing them a safe haven to do homework, play tennis and set personal goals. WTEF has a 100 percent graduation rate in which kids frequently achieve athletic and academic scholarships.

When tennis legend and world-class philanthropist Andre Agassi came to our capital city on April 11 to receive WTEF’s Champion of Tennis Award, it was an event to remember. Agassi hit the courts at the Fitzgerald Tennis Center with Reps. Jane Harman (D-Calif.) and Fred Upton (R-Mich.), former Sen. John Breaux (D-La.) and various local media and business big shots thrilled to huff and puff with the famous champ.

Agassi – who looks as fit as the day he retired – showed the same grace we saw in 2006 when he bid farewell to his 21-year career with a kiss blown to the stands from center court.

“Hitting tennis balls with Andre Agassi was like being in tennis heaven for Washington-area tennis fans and highlighted Agassi’s commitment to helping kids,” Breaux told me. Breaux was the top tennis-playing senator for years before he retired. He currently holds a high mid-Atlantic ranking.

Board member and past WTEF President Jerry Jasinowski said, “Andre Agassi epitomizes all the principles of excellence we try to get our kids to embrace at the Washington Tennis and Education program.”

A superstar on and off the court, Agassi launched the Andre Agassi Charitable Foundation in 1994. His thoughtful devotion to improving life for at-risk youth remains a constant today. He speaks proudly of Agassi Prep Academy in Las Vegas. I had the opportunity to sit and speak with the gentle giant the day of the event. We chatted about tennis, children, problem-solving skills and making a difference.

Tell me more about the student body at Agassi Prep School in Las Vegas.

People told me that I shouldn’t construct the school in that part of Las Vegas, which is one of the worst sections, because it would get defaced by people. But nothing has happened to the school because there is a feeling of mutual respect.

Can you compare the Washington Tennis and Education Foundation and your own foundation?

No two organizations can be more aligned; both reach kids primarily through education, tennis, and the skills they teach.

What role does internationalism play in your foundation and Agassi Prep?

I want it to take on an increasingly larger role. We are a young school and our first goal is to get kids proficient in math, science, and verbal skills. We are now starting to introduce ideas of giving back, community service, and the kids being stewards of the future.

I’m curious if other retired tennis champions are involved in significant philanthropic events.

Tennis, more than any other sport, has retired athletes who are active about giving back. They reach the most people.

I’ve often thought about the parallels between tennis and life/education. Have you?

Yes. On the tennis court you experience a lot of soul-searching. You set a goal for yourself and get over the finish line. These kids are setting a goal for themselves: getting a certificate. If they work hard, focus, and believe in themselves, their opportunities are endless. Ultimately, if you apply yourself at tennis you’re pretty much guaranteed a scholarship anywhere. Problem solving is a big asset in life and you learn to solve problems on the tennis court. Easiest connection is work hard at tennis and get a scholarship. Stay in school.

Why did you choose to focus on education?

I started working with kids, have always loved them, and eventually just backed into it. After clothing 3,000 kids a year through a project called Operation School Bell, I finally realized that the only way to get them truly ahead of the curve is to provide them an education.

Are there any similarities between how you competed in tennis and how you now compete for these children?

Our kids used to be called children at risk; now they’re called children of hope. I fight for these kids every day. The satisfaction I get is so much more than holding up the winner’s trophy on Center Court, and that was pretty great.

How is it playing tennis with the kids?

The only thing I really don’t love anymore is the running, so if I can get them to hit the ball directly back to me it’s good.

What about the competition on the courts? Do you miss it?

Describe the feeling of winning a great match.

You realize you don’t have to be good, just better than one person.

How would you compare your foundation work to pro tennis work?

My foundation is much more fulfilling; you have blinders on when you play a professional sport for a living. Tennis has been a vehicle for me to affect the lives of these children.

Do you feel that the professional tennis community is active enough philanthropically?

Yes, tennis players have set a gold standard in giving back. Our active and retired tennis pros reach many people.

Your tennis career made it possible for you to travel around the globe. Do you feel like you gained a different perspective on the world as a result?

You bet. I married a German too. The world is very small and connected; when you have had the opportunity to travel you realize this. Most of my travel was seeing tennis stadiums and hotel rooms. I look forward to showing my own children villages in India and animals in Africa.

What was the coolest place you ever visited for a tournament?

Tennis courts are all the same dimensions! I saw many tennis courts… I always tried to stay focused.

You’ve long been a staunch Democrat. What are your thoughts on the upcoming elections?

I am attracted to Obama but would be satisfied with any of the candidates. McCain has a lot of experience; I like that. He understands immigration.

Once a denim-clad rebel at the net, Agassi has matured into a remarkable man. He joins Billie Jean King, Arthur Ashe, Andrea Jaeger and Jimmy Courier in the sports-philanthropy hall of fame. Go Andre!