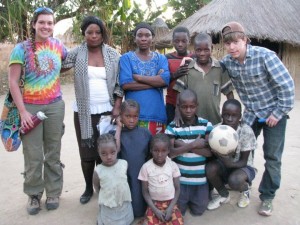 This summer I participated in the Learn Serve Zambia trip, one of three abroad programs run by Learn Serve International for DC area high school students. The purpose of this program was two-fold, to educate us on development and social issues in lesser-developed countries, while at the same time working with different organizations, and schools in the country on educational and fundraising projects. The group of students participating in this program was diverse, with students from different ethnic, social, and cultural backgrounds, who came together in the three weeks of the program, learning as much about one another, as we did about Zambia. For many of these students, including myself, this trip was made possible through the financial support of Learn Serve International, and for me in particular by the Institute for Education. 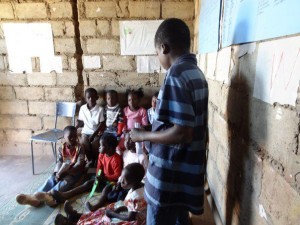 Before I went to Zambia, I thought that I had a comprehensive knowledge of the issues in countries like Zambia, having read books, and many articles on the social and economic issues in these countries. However, over the course of my time in Zambia, I would find that the information which I had read, was only half of the story, leaving out the people, the cultural issues, and the reality of the situation which I would come to understand over the course of the trip.

The first organization that we worked within the country was African Directions, a community center set up by former musicians and actors. The centers, we went to two of them, served multiple purposes, they provided children a safe place to participate in recreational activities, such as pool, instead of local bars. The centers also provided educational services for younger children and had an onsite health clinic with medicine, and testing for HIV/AIDS, and other STIs. The final, and perhaps most substantial component of the center was their outreach group, a group of dancers, and actors, who would go into local communities, and spread information, and awareness of social issues in the communities they visited. Our work with this organization consisted primarily of helping spread awareness of the program, our visit drew the attention of local television stations, which taped, and interviewed us during our visit to the main center. We also worked on painting, and cleaning the other community center, using the funds we had raised to buy the materials.  While this program was interesting, and showed what a difference a few committed, driven minds can make, my biggest take away from this was the culture of the country. The performances the outreach groups did, were not planned in advance, and there was no crowd waiting for them, rather people arrived, as they performed, being drawn in by the drum beats, and singing, until there was a sizable crowd watching. Unlike street performances back home, people stayed and watched, the whole performance, even pushing away others trying to disrupt the performers. The impact that music, could have, made me realize then, that development that social change, can come from anywhere, whether it be from foreign support, or the beat of a drum, anyone has the ability to make an impact, when people are listening. 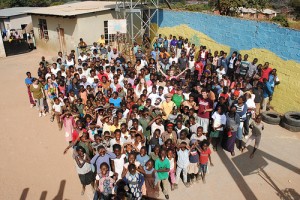 The next location we visited was the Chikumbuso Women’s and Orphans project. This organization, in the heart of the N’gombe slum area of Lusaka, provides a full education through 6th grade, and a daily meal, to orphans in the community, as well as providing widows a way to sustain themselves, and earn an income through weaving bags out of recycled shopping bags. At this location we broke up into groups of 2 or 3 students, to do activities with the students. My partner and I had decided to play parachute games with the students, something most American students play with during elementary school. We did this for two days until on the final day on our stay, the head teacher wanted us to work with the students in the classrooms, which we did, with limited success, because we did not have time to prepare. This led me to believe that our activities with the children, were not useful, and didn’t make an impact on the children, or the teachers. However, on the last day as we were distributing supplies to the teachers, the head teachers called out me and my partners parachute game, and let us know that because of the attention we had drawn from other children in the community, playing on the communities field area, she expected enrollments to increase in the school. While we had only played the game with those students who went to the school, and those few other children who joined in, the happiness, and the enjoyment they got from it, translated to other children in the community.  Back home, a similar thing can happen with a movie, where word of mouth, can persuade people to go to a movie, here the positive experience we gave the students who participated in this life changing school, spread through word of mouth, persuading children to go there. 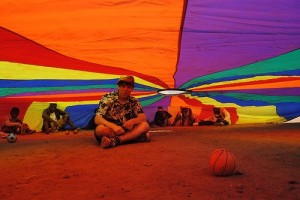 After visiting Chikumbuso, which by large was successful in its mission, we visited the Chitukuko school, which started with similar ambitions but had not found the same success that Chikumbuso had. The school was barely able to support itself financially, operating out of a rundown, cramped, building they rented, and only able to feed the children that went there once a week. While we only briefly visited the school we could tell that the need at this school for help was significantly greater, although the teachers were dedicated to their jobs, they had trouble effectively teaching the students, and as the headmaster told us, the few good teachers would often be taken by schools which could afford to pay them more.  This school was a much greater representation of the reality of projects that start with Chikumbuso’s ambitions, left without any means of income, or funding, they are limited in what they can do, despite their desires. This school, and the head master’s story touched me, and the financial realities of the school, the $60 dollars a month they pay for rent, showed me how easy I could, back home fundraise, to make an impact at the school. I decided that for my action plan, I would along with other students, use a variety of methods to fund raise for the school, to help them implement their mission.

The final school we visited was a rural school in the Monze province, the Malambo Basic School.  The  work we did here, and the school itself, very much resembled the other schools we had visited over this trip, the only difference being that the work we did there was much more educational focused. The significance of this part of the trip was the culture of the community, which we learned the most about during our short time at one of the school children’s homes. These students lived in a complex of small huts, facing towards a central courtyard this, along with a few fruit trees, animals, and domestic possessions, were all that the families had, without electricity, or running water. This lack of many of what we would consider necessities while interesting, was not as interesting as the closeness of the community, while we were eating with the family, several local boys, came over to play with us, something which would never happen back home. These kids all respected the mother too, listening to her, and being quiet when she asked them to. Although they did not need to listen to her, the children did not question her authority, but rather treated her as their own mother. For me this was a reflection of the harsh reality we had seen throughout our trip, these people were together, out of a shared need, a reliance on one another to help them if they faced problems.

Despite the issues, the diseases, the poverty these people faced, their values, their desire for education, where money, not interest is a limiting factor, and their resilience, are in my opinion needed here in America in the long term, as much as water, and electricity are needed in Zambia. While their problems, are greater, and their resources fewer, the people which we met, worked with, played within Zambia approached seemingly unchangeable issues with an enthusiasm, with a passion, that if even those of us on the trip take back home, will still have a significant impact on the problems in our country, the way we debate issues, and our ability to respond to whatever challenges we may face. That’s what I’ll take away from Zambia, not the problems, which I knew about before, but the spirit, the collective passion for a solution, the knowledge that whatever the problem is, I can withstand it, and in time make it better.