This summer’s LearnServe Jamaica participants traveled to Jamaica for 17 days. We spent our first five days in the rural coffee-farming village of Penlyne Castle. Our living arrangements for this first part of our trip were homestays amongst the village families. I stayed with Richard, whose son and daughter was away at high school in Kingston. Richard spent his mornings working on his farm, before the heat became too strong, and would spend his afternoon preparing dinner. He was extremely generous and gave us a fantastic first impression of Jamaica. 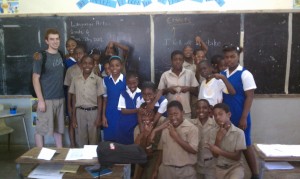 My time was spent visiting the elderly, touring the farms that are the primary source of income and sustenance for the village, and experiencing the day-to-day life as those who live there know it. Visiting the elderly was particularly powerful as most had spent their entire lives in the Penlyne Castle village, or in a nearby village. A few of them had visited the United States or the UK where conditions were considerably better than in Penlyne Castle. But not a single person spoke with vitriol or bitterness about the rural conditions they lived in; most, in fact, said they preferred the village life to the hustle and bustle of life in places like New York City or London. This had a strong impact on our group and made us realize how much we all took for granted in our own lives. A large majority of the group complained about the lack of hot or running water and dealing with the heat with no air conditioning. Personally, I had a tough time adapting to life without a cell phone or the internet. But these were things that we only had to deal with for seventeen days. The people we saw and met had experienced these conditions for 60+ years and had no complaints.

One day, while we were visiting students at the Penlyne Castle Primary School, we were unexpectedly asked to teach the classes ranging from grades 1 through 6. This introduced quite a challenge to the group as we had not prepared lesson plans. However, we quickly discovered that with the intellectual curiosity of the students and our own ingenuity it was a simple challenge to overcome. There was such a strong desire to learn among the students that we were taken aback. It was inspiring to see children so eager to learn, especially in what we considered poor school conditions like limited supplies and “classrooms” which were actually spaces divided by chalkboards in one large building.

On the last night in Penlyne Castle, while I was walking from my host family’s house to our nightly meeting, a young girl from the school came running up behind me calling my name. She walked with me for several minutes and as we spoke she thanked me for teaching her at the school. This was one of the most powerful moments of the trip for me, as it was the moment I realized that we were having an impact on the people we worked with. I met so many people that day at school, I could not possibly remember all their names, but I will never forget that she remembered mine.

Other highlights of our time in Penlyne Castle included a 10-hour hike to the peak of the Blue Mountain, after which we could say that we had been to highest point of Jamaica; all of the savory Jamaican food we were able to try; and, of course, we also sampled Jamaica’s world-famous coffee, picked fresh just days before we drank it. 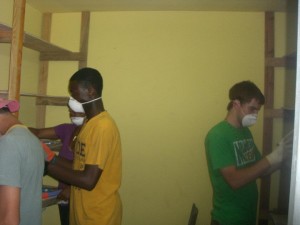 The second week of our trip brought a large change in scenery as we left the mountains and entered Kingston the largest city on the island, where we made the Shortwood Teacher College Hostel our home. We spent the mornings teaching at Allman Hill, which was about 30 minutes outside of the city, and in the afternoons we toured the cultural centers of Jamaica’s capital, such as Marcus Garvey’s home ‘Liberty Hall’, the National Gallery, and the Institute of Jamaica.

Our teaching experience that week was very different, as it was more structured and we spent our nights developing lesson plans for the next day. Everyone without prior teaching experience quickly realized there was much more to teaching than showing up to school for eight hours every day. The smiles and appreciation of the students made all the hard work worth it. The children were so excited each day when we arrived and were eager to tell us about themselves and show us what kinds of math problems they knew how to do. The children also had plenty of questions for us about where we were from. My hair was of particular interest to them, as they had never seen someone with red hair before. Day after day I was once again impressed with the level of commitment the students showed to their schoolwork, and how much effort they put into grasping the concepts we were teaching them.

By the end of this week, the constant action and activity had started to wear on the group. With only one day standing between us and a free day at one of Ocho Rios’ famous beaches, we spent Saturday working at the Source Farm EcoVillage. The Source Farm Foundation and Learning Village is a multi-cultural, intergenerational eco-village, located in Johns Town, in the parish of St. Thomas, Jamaica. Volunteers come from all over the world to focus on environmentally friendly construction and sustainable living. We were there to help begin the construction of a community education center. While knowing and expecting difficult labor, I do not think any of us was prepared for the work day ahead of us. A five-hour day in sweltering 90-degree heat spent performing various tasks. For me and my group, this meant shoveling gravel and carting ‘mall’ a dirt-like substance used to create the foundation and walls. By the end of the day, we had completed placing a layer of gravel and the first level of the building’s foundation. More importantly, however, we had a great appreciation for all the people from various backgrounds and groups who had come together and learned how to work side-by-side to achieve a single goal. 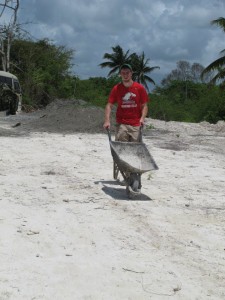 Our last week in Jamaica was spent at Scott’s Hall Primary School. This area was even more rural than the previous school, as were our living quarters, Tapioca Village. Once again we spent our mornings teaching the students, but this time we worked in the afternoons on several projects to improve the school. We cleaned and cataloged the school’s library, painted the principal’s office, cleaned the paintings of Jamaica’s national heroes on the front of the school. We also built and painted a new divider for the fifth and sixth-grade classes that could also be swung open to accommodate a larger group event.

Everywhere we went the LearnServe group continuously experienced hospitality and gratitude of the local Jamaicans and the students we helped. They never wanted us to leave and that was the greatest reward of the trip. Seeing the effect we had on the young children in the schools, who still have so much ahead of them. We returned home with a new appreciation for all that we have. After experiencing the pure happiness of people who seemed to have so much less than us we had provided us with a valuable lesson about enjoying life regardless of life’s hardships—a Jamaican belief most people have already heard from Bob Marley. In the end, the trip enriched the lives of those of us who went on the trip, as well as those we came into contact with and helped in Jamaica, and that is all I could have asked for.