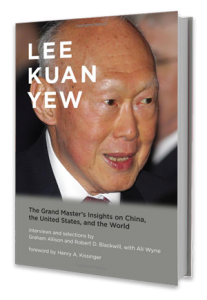 Ali Wyne, a fellow with the Institute for Education, has co-authored a new book with Graham Allison and Robert Blackwill, Lee Kuan Yew: The Grand Master’s Insights on China, the United States, and the World  (Cambridge, MA: MIT Press, 2013).  Henry Kissinger writes in the foreword: “I have had the privilege of meeting many world leaders over the past half-century; none, however, has taught me more than Lee Kuan Yew, Singapore’s first premier and its guiding spirit ever since.”  Published on February 1st, Lee Kuan Yew’s combined hard-copy and digital sales are already approaching 25,000.

Drawing on their in-depth interviews with Lee as well as his voluminous writings and speeches, the authors extract the essence of his visionary thinking.  The questions and answers that constitute the core of the book cover topics including the futures of China and the United States, U.S.-China relations, India, and globalization.

“I found myself engrossed this week by the calm, incisive wisdom of one of the few living statesmen in the world who can actually be called visionary.  The wisdom is in a book, Lee Kuan Yew: The Grand Master’s Insights on China, the United States and the World, a gathering of Mr. Lee’s interviews, speeches and writings….He is now89, a great friend of America, and his comments on the U.S. are pertinent to many of the debates in which we’re enmeshed.” (Peggy Noonan,4/4/13)

“[This book] is packed with intelligence and insight.  If you are interested in the future ofAsia, which means the future of the world, you’ve got to read this book.” (Fareed Zakaria,3/3/13)

“Lee Kuan Yew: The Grand Master’s Insights on China, the United States, and the World forms a kind of last testament of the ailing, 89-year-old Mr. Lee.  It is based on interviews with Mr. Lee…to which the authors add a distillation of Mr. Lee’s speeches, writings and interviews with others over many years.  The book focuses forward on Mr. Lee’s prognostications, not backward on his accomplishments.  Messrs. Allison and Blackwill refrain from commentary on the man and his ideas, letting readers interpret for themselves.” (Karen Elliott House,2/25/13)

“Graham Allison and Bob Blackwill have important questions to ask about China, America and the extraordinary impact of the relationship of those two countries on the rest of the world.  For answers, they turned to Lee Kuan Yew, Singapore’s first premier and one of the world’s most formidable geopolitical thinkers and strategists.  The result is a fascinating book called Lee Kuan Yew: The Grand Master’s Insights on China, the United States, and the World.” (Ian Bremmer,2/20/13)

“Lee’s powerful intellect is captured in a new book, Lee Kuan Yew: The Grand Master’s Insights on China, the United States, and the World.  It’s a collection of interviews with him by Harvard University professor Graham Allison, Council on Foreign Relations senior fellow Robert Blackwill and Harvard’s Belfer Center researcher Ali Wyne, while also drawing on other selected and cited writings by and about Lee….as the book, and the adaptation here of the China chapter, reveal, Lee is as sharp, direct and prescient as ever.  Though the volume was completed beforeChina’s current territorial tensions with its neighbors, it helps expose, and explain, Beijing’s hardball mind-set.” (Zoher Abdoolcarim,2/4/13)

Ali is an associate of the Harvard Kennedy School’s Belfer Center for Science and International Affairs and a contributing analyst at Wikistrat.  In 2012, Young Professionals in Foreign Policy and the Diplomatic Courier selected him as one of the 99 most influential foreign-policy professionals under 33.