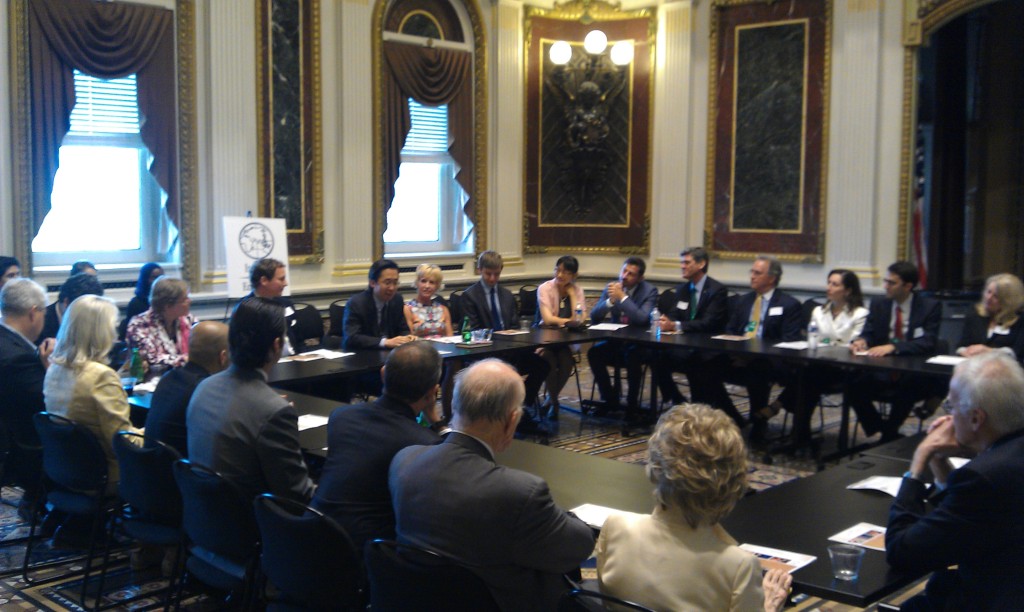 United States Chief Technology Officer, Assistant to the President and “entrepreneur-in-residence” Todd Park was IFE’s honored guest speaker at the June 11th INFO Public Policy Roundtable. Coach Kathy Kemper kicked off the salon evening with a special recognition of IFE Interns and Fellows, who do much of the essential work of the Institute. She noted IFE’s intern program has been cited as “the best intern experience inside the Beltway.”

Coach Kemper then asked Mark Ein, owner of the Washington Kastles, to say a few words about the team. He was happy to tell the group that the Kastles’ have a winning streak of 32 consecutive matches, which is just one match shy of the record for any pro sports team! He cordially invited all those present to attend what he called “a tennis match with a hockey atmosphere.” Ein remarked that Coach Kemper, who has taught tennis at the White House through five administrations, “made tennis cool” in the nation’s capital.

John Paul Farmer, Senior Advisor at the White House Office of Science and Technology Policy and IFE’s Emerging Markets Roundtable Co-founder, then introduced US CTO Todd Park. Farmer gave a brief background of Park’s impressive experience as a technology entrepreneur, and summarized his organizational and business approach as “mission-driven.”

Park then spoke briefly about his job as US CTO, and gave several examples of the work his team has been doing since he succeeded Aneesh Chopra, the first-ever US CTO, in 2012. His role, Park said, was to apply technology to advance issues high on the President’s agenda: economic growth, public safety, education, healthcare, and saving taxpayer money, to name a few.

Park’s office uses a three-pronged approach to solve problems: first, he organizes “lean startup teams,” which include experts in strategy, policy, technology and operations, all working together to solve a specific problem. Second, each team works to produce a “minimum viable product” as quickly as possible. And third, the product goes through rapid—weekly or even daily—cycles of iterative development.

Park spent most of the salon giving fascinating examples of the kinds of projects his team has tackled. The Open Data Initiatives liberate government data in computer-readable form; entrepreneurs from across the country can then use those data to design and build new apps to do everything from increasing consumer choice to spotting credit card fraud to fighting crime. The Presidential Innovation Fellows program, which Park started a year ago, brings some of the country’s best and brightest innovators and entrepreneurs into the Federal government for six- to 12-month stints to work collaboratively with government innovators to get big things done. One of their recent accomplishments was a system called RFP-EZ to make the process of government procurement of services easier and more accessible to small, innovative companies, as well as cheaper and more efficient for the government.

A lively Q&A ensued, and Park ended on an inspiring but perhaps surprising note. Despite having co-founded multiple successful companies in the private sector, Park declared that the “single most extraordinary experience [he] has had as an entrepreneur… has been working for the Federal government.”