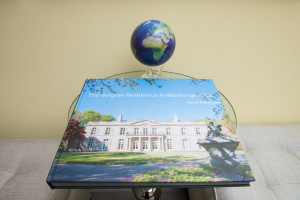 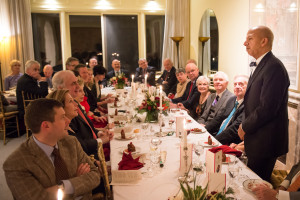 In its last event of 2013, the Institute for Education honored its own at an intimate and sumptuous dinner, hosted by the iconic Ina Ginsburg at her Foxhall home.  There, Coach Kathy Kemper, Founder and CEO of IFE presented the International Diplomacy Award, one of the Institute’s highest honors, to one of its most dedicated hosts: the Ambassador of the Kingdom of Belgium, H.E. Jan Matthysen, and his wife Agnes Matthysen.  The evening brought together IFE’s closest friends and supporters, including a dozen Ambassadors, elected officials, and long-time IFE luminaries like founder Jim Valentine.

After a lively reception in the parlor, the evening began with opening remarks from Coach Kemper, who paid tribute to the exceptional contribution that our host and 2011 IFE International Diplomacy Award Recipient, Ina Ginsberg, has made to IFE and the city of Washington.  Coach Kemper also welcomed distinguished gusts from the diplomatic corps, the United States Senate, the White House, the national print media, and other close friends of the Institute for Education, for their contribution to what has been one of IFE’s most memorable seasons on record.

Following the opening course, attention turned to the evening’s award recipients, Jan and Agnes Matthysen, IFE’s long-time diplomatic stewards.  Ina Ginsberg presented the couple with the International Diplomacy Award for their unparalleled commitment to IFE’s mission of encouraging civility and finding common ground, and in particular their exceptional generosity in opening their home to members of the Institute during their stay in Washington.  Though their tour draws to a close early in the New Year, the Ambassador and Agnes wished all assembled their very best, and left a gift: Agnes’ impressive collection of photography of the stunning Belgian Residence they called home – a hardback volume that will be treasured for years to come.

Others joined in honoring the couple; remarks by H.E. Sergey Kislyak, Ambassador of Russia, stressed the value of common cause; farewell remarks by former Mayor Anthony Williams brightened the mood; all appreciated some insightful and timely commentary by Juliet Eilperin from the Washington Post.  The evening continued long past the final course, as the IFE community bid congratulations and farewell, for now, to the Matthysens.