IFE’s very own Todd Park on the COVER of Time!!!! 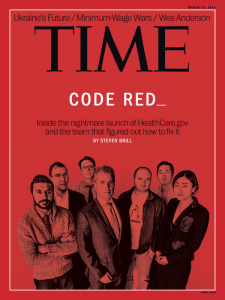 Last Oct. 17—more than two weeks after the launch of HealthCare.gov—White House chief of staff Denis McDonough came back from Baltimore rattled by what he had learned at the headquarters of the Centers for Medicare and Medicaid Services (CMS), the agency in charge of the website.

McDonough and the President had convened almost daily meetings since the Oct. 1 launch of the website with those in charge–including Health and Human Services Secretary Kathleen Sebelius, CMS administrator Marilyn Tavenner and White House health-reform policy director Jeanne Lambrew. But they couldn’t seem to get what McDonough calls “actionable intel” about how and why the website was failing in front of a national audience of stunned supporters, delirious Republican opponents and ravenous reporters.

“Those meetings drove the President crazy,” says one White House senior adviser who was there. “Nobody could even tell us if the system was up as we were sitting there, except by taking out laptops and trying to go on it. For Denis, going to Baltimore was like leaving Washington and visiting a war zone.

“But not even a trip to the war zone produced good intel. According to notes from a meeting in one of CMS’s three war rooms (yes, things were so uncoordinated that there were three), those assembled discussed the fact that “we heard that the capacity”–the number of possible simultaneous users–“was 100,000 people, and there are 150,000 people on it.” Yet five days later, White House chief technology officer Todd Park would tell USA Today that the capacity was 50,000 and that the website had collapsed because 250,000 people tried to use it at the same time. Park, a highly successful—but, for this job, disablingly mild-mannered—healthcare tech entrepreneur, had been kept out of the planning of the website. In fact, the site’s actual capacity at the time was “maybe a few thousand users,” according to a member of the team that later fixed it.

What McDonough was able to pry out of the beleaguered crew at CMS on his Baltimore visit was that even on Oct. 17—by which time the site’s failure was the subject of daily headlines and traffic had collapsed—only 3 in 10 people were able to get on at all. And of the lucky third that did, most were likely to be tossed off because there were so many other bugs.

Unknown to a nation following the fiasco, McDonough’s assignment from the President had boiled down to something more dire than how to fix the site. As the chief of staff remembers his mission, it was “Can it be patched and improved to work, or does it need to be scrapped to start over? He wanted to know if this thing is salvageable.

“Yes, on Oct. 17, the President was thinking of scrapping the whole thing and starting over.