The Institute for Education is proud to partner with USC’s Department of Computer Science to hold a free all-girl summer coding camp for K12 students. 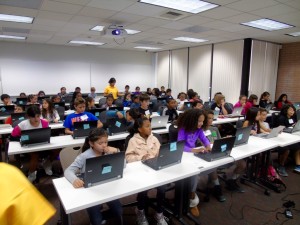 Although science and technology play a crucial role in the way we see the world, most kids between the ages of 9 and 12 don’t know what professionals of these fields do, and they’re not to blame. Engineers don’t get free publicity on television or appear in fancy magazines. Let alone girl engineers.

Between the 4th and 8th grades, girls start to identify themselves with stereotypes. This often results in them turning to the humanities, while most boys prefer the hard sciences. Hoping to encourage girls to become interested in computer science, the USC Viterbi Department of Computer Science is offering an all-girl coding camp during the first two weeks of June. 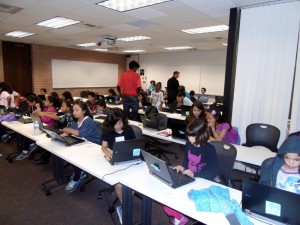 “There is nothing innate to men that makes them better at science than women,” explained USC Viterbi Professor Jeff Miller, director of the camp. “The digressions between genders are often based on labels.”

Along these lines, coding camp won’t be solely focused on programming. It will also aim to break down stereotypes about girl engineers, presenting its students with a group of tutors composed of seven women and only two men. 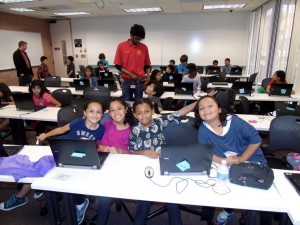 “Unfortunately, Computer Science is an alien world for many women,” said Shweta Pargaonkar, one of the M.S students in Computer Science that will be in charge of tutoring the camp. “I believe that it is key to encourage girls to immerse themselves in technology and what better way to start than a coding camp dedicated specially for girls!”

Even though the camp has a strong focus on educating girls, it is also open to children belonging to other underrepresented demographics, such as African Americans, Latinos and low-income families. Focusing on demographics that aren’t normally exposed to computer science represents endless possibilities. For instance, a person coming from a specific background could have insights that allow them to identify the need of a certain program or app that others probably wouldn’t even think of.

Camps are free thanks to the generous support of Kathy Kemper of the Institute for Education and the USC Department of Computer Science.

The CS@SC Summer Camps are intended to expose K12 students to topics in Computer Science. The pervasiveness of Computer Science touches all aspects of life, including email, mobile devices, games, the Internet, operating systems, networks, robotics, and many others. Children are already more technologically-advanced than their parents were at the same age, but children will need to know more than just how to use computers to succeed in a technologically-advanced world in the future. Understanding technology at a deeper level than usability will give students an advantage in many aspects of life.