That was the emphatic welcome that Coach Kathy Kemper provided to the guests at the Embassy of Singapore in Washington, DC. Before introducing our gracious hosts, Ambassador Ashok Kumar Mirpuri and his wife, Coach took a moment to acknowledge the great work of the Presidential Innovation Fellows (PIFs) and their contribution to advancing the technical prowess of the Federal Government.

After a round of applause for the PIFs, Coach highlighted a new partnership between the Institute for Education (IFE) and the University of Southern California Viterbi School of Engineering to provide a free coding camp to local LA kids in third through ninth grade. The camp places an emphasis on educating minorities and females in the realm of coding, two demographics that are underrepresented in tech fields. The camp just concluded its inaugural summer session by educating over 200 boys and girls in basic coding practices and providing them a foundation for a lifetime.

“We, the people in this room, are the game changers and the influencers helping to move our nation forward,” Coach said as she introduced Ambassador Mirpuri. After thanking his guests, the Ambassador highlighted three things about Singapore. The first two, food and weather, were light-hearted, but the third was to set up the rest of our evening. The third item he mentioned was Singapore as a “Smart Nation.” With his country being a very small nation, they needed to take full advantage of technology in order to best serve both the aging population as well as the upcoming generations. One example he provided of this was the MyTransport App, which collects all public transportation information and helps provide more accurate bus and commute times for the citizens.

After a short video, the conversation between John Paul Farmer, the Director of Microsoft’s Technology & Civic Innovation team, and Dhanurjay “DJ” Patil, The Chief Data Scientist at the White House, began. The core question of the night was, how can we, as a nation, become smarter through open and responsible data use. This calling is exactly what brought DJ to Washington. He truly believed in the mission of The Office of Science and Technology Policy (OSTP), which was “to responsibly unleash the power of data to benefit all Americans.”

To provide some context around the mission to those in the room, DJ outlined OSTP’s four focus areas surrounding big data and provided some colorful examples around two of them. The first area they are focusing their big data efforts on is Healthcare. The power of big data to positively affect the level and quality of healthcare provided is immense. He used the example of Nathan Han, a 16-year-old from Boston who utilized the power of big data to develop a machine-learning software tool to study mutations of a gene linked to breast cancer. Using data from publicly available databases, Nathan examined detailed characteristics of multiple mutations in order to “teach” his software to differentiate between mutations that cause disease and those that do not.

The second focal area is making data, and large amounts of it, available publicly to as many people as possible. The idea is that the more individuals that have access to the data, the more innovative and creative approaches to solving problems will be discovered. DJ used a personal example from college to highlight this. After hours he would go into the computer lab on campus and connect all of the computers in order to source publicly available weather data and find patterns to more accurately predict the weather.

In addition to healthcare initiatives and making data more publicly available, OSTP is also focused on utilizing data for social justice missions such as creating 21st Century policing as well as increasing the general capacity for a more data-driven government. Now that our government is pushing towards making more data-driven policy decisions, we have to also fill in the other piece of the puzzle in order to be successful. The other piece of that puzzle is bringing in smart individuals who understand big data to work in the government. In a shout out to these individuals, DJ referenced an article he wrote titled, “Data scientist is the sexiest job of the 21st century.”

He went on to explain that having these individuals will help shift the culture in DC from one of siloed agencies solving problems without any cross-communication to a more collaborative, Silicon Valley-like atmosphere. DJ elaborated by saying that in Silicon Valley, you can call an expert for advice and sit down for lunch with them that same day to discuss. In other words, there is a lot of cross-pollination of ideas and problem solving going on in the valley. However, in DC, we have agencies that are less than a few city blocks apart, yet they don’t share any data or discuss similar problems. This is a major issue that the government’s open data initiative is attempting to solve.

As the night was coming to a close, John posed one last question to DJ. “What impact did your time in community college have on your career and life?” DJ spent his first year of higher education at a community college and he credits this experience with providing some of the most valuable lessons in his life. He believes that everyone should have an opportunity to pursue higher education, which is why he was so excited by President Obama’s announcement of his support for free community college for all Americans. By increasing the number of individuals achieving higher education, we will increase the number of people understanding big data, and also increase our capacity as a nation to develop unique and innovative approaches to our most pressing problems. DJ closed the night by saying that by combining the power of technology with effective cross-sector collaboration, we can truly make a difference in our country and around the world!

View: DJ Patil’s White House Posts |Click below to see How DJ gets to work at The White House each morning? via long board!! | 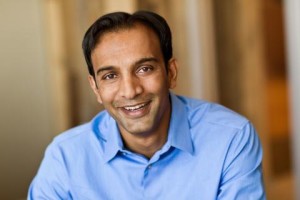 About our distinguished guest: Dr. DJ Patil is Deputy Chief Technology Officer for Data Policy and Chief Data Scientist at the White House in the Office of Science and Technology Policy. President Obama has prioritized bringing top technical talent like DJ into the federal government to harness the power of technology and innovation to help government better serve the American people. Across our great nation, we’ve begun to see an acceleration of the power of data to deliver value. From early open data work by the National Oceanic and Atmospheric Administration (NOAA), which provides data that enables weather forecasts to come directly to our mobile phones, to powering GPS systems that feed geospatial data to countless apps and services — government data has supported a transformation in the way we live today for the better.

DJ joins the White House following an incredible career as a data scientist — a term he helped coin — in the public and private sectors, and in academia. Most recently, DJ served as the Vice President of Product at RelateIQ, which was acquired by Salesforce. DJ also previously held positions at LinkedIn, Greylock Partners, Skype, PayPal, and eBay. Prior to his work in the private sector, DJ worked at the Department of Defense, where he directed new efforts to bridge computational and social sciences in fields like social network analysis to help anticipate emerging threats to the United States.

As Chief Data Scientist, DJ will help shape policies and practices to help the U.S. remain a leader in technology and innovation, foster partnerships to help responsibly maximize the nation’s return on its investment in data, and help to recruit and retain the best minds in data science to join us in serving the public. DJ will also work on the Administration’s Precision Medicine Initiative, which focuses on utilizing advances in data and health care to provide clinicians with new tools, knowledge, and therapies to select which treatments will work best for which patients, while protecting patient privacy.

As part of the CTO team, DJ will work closely with colleagues across government, including the Chief Information Officer and U.S. Digital Service. DJ’s work will also include data science leadership on the Administration’s momentum on open data and data science.

Over the past six years, the Obama administration has made historic progress in this area. In addition to making more than 138,000 data sets available to the public for innovation and entrepreneurship, the Administration is also empowering Americans with secure access to their personal data and expanding our capacity to process and examine large and complex datasets. Utilizing data for innovation holds amazing potential for the future of our country.

DJ’s work will help ensure government remains effective and innovative for the American public in our increasingly digital world.

Ambassador Mirpuri joined the Ministry of Foreign Affairs in 1984, serving as first secretary (political) at the Singapore Embassy in Jakarta (1987-91) and as director of the ministry’s Policy Planning & Analysis Directorate I, specializing in Southeast Asia (1994-97). In 1997, Ambassador Mirpuri was seconded to Shell International Ltd. in the United Kingdom as corporate adviser (Asia Pacific), returning to the Singapore Embassy in Jakarta in 1998 as minister-counselor and deputy chief of mission.

Ambassador Mirpuri holds an honors degree in political science from the National University of Singapore, and he received his master’s of arts degree from the University of London’s School of Oriental & African Studies under a Raffles Scholarship. He also did the Program for Executive Development at the Institute for Management Development in Lausanne, Switzerland, and attended the Advanced Management Program at Harvard Business School in the United States. Ambassador Mirpuri was awarded the Public Administration Medal (Gold) by the Singapore government in 2010