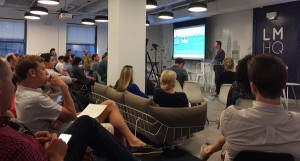 Bitcoin has been in the news a lot recently. The upstart crypto-currency has made headlines promising an alternative to our current financial system, dominated by the big banks, unelected central bankers, and underpinned by intrinsically valueless fiat currency. Alternatives to this system have always been viewed at best as something of a novelty. At worst, an absurdity. But in 2008, Bitcoin emerged as distributed currency with legs. And people are starting to pay attention.

Bitcoin is of course still quite new and so too is the technology that underpins it, the blockchain. If you’ve never heard that term before, don’t worry, you’re not alone. The blockchain is the distributed open ledger that makes transactions secure, anonymous, and trustworthy. The value in a faultless transaction is of course incalculable. Entire industries have been built around payment verification and transactional security.

To find out how this will affect the world we live in, and how else the blockchain might transform society, IFE, in collaboration with Microsoft and the MIT Media Lab, hosted a pair of conversations centered around how the blockchain can be used to not only process payments, but to establish property rights, support free and fair elections, and reduce the amount of waste and corruption experienced in many communities around the world. 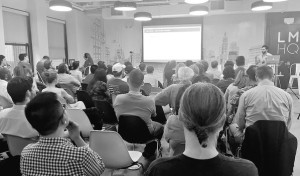 The first forum was hosted by IFE Emerging Technology Roundtable (ETR) Founder John Paul Farmer, Director of Technology and Civic Engagement at Microsoft. Joining him was MIT’s Director of Digital Currency Brian Forde. On stage at the event were a number of panelists exploring how to take the blockchain beyond bitcoin. Along with the applications I already mentioned, we heard about how the blockchain can be used to create a persistent identity for those living in communities where that has never been possible. We also heard about unlocking more value for governments and companies by using the blockchain to support payment compliance. Gone are the days where we needed escrow accounts and election monitors. With the blockchain, fraud as we understand it becomes prohibitively difficult if not impossible.

You can watch the event here or you can read the tweets about it here.

The day following this public event, Microsoft partnered with the Institute for Education to host a VIP dinner for an extended conversation on the topics. Included in the discussion were executives from a number of prominent financial institutions as well as public officials like the first CTO of New York City, Minerva Tantoco. We explored issues with scaling the blockchain as well as how to promote adoption without undermining the service by altering its defining characteristics. It was clear from both conversations that excitement for this technology is at a fever pitch but there are important issues that need to be resolved in order to ensure that the blockchain can live up to its potential. How will it be regulated? How will it be grown in order to meet a demand for its services? Who will manage that growth? We learned a tremendous amount over these two days but the conversation left us all with more questions which only encourages us to continue to explore these issues in the future. IFE Leadership in attendance included IFE Founder and CEO, Coach Kathy Kemper; IFE ETR Founder, John Paul Farmer (Microsoft); and IFE’s EMR Cofounder Andrew (Brand Foundry). (Microsoft-MIT-IFE Blockchain Dinner Guest List)

About our Guest Speaker: Brian Forde, former White House senior advisor for mobile and data innovation, has joined the MIT Media Lab as director of digital currency. In this newly created position, Forde will work with researchers across the Institute and leading experts at other universities around the world in a new initiative to address some of the most critical challenges to creating a safe, stable, and secure digital currency.

“We are fortunate to have Brian join the Media Lab to help organize an important research agenda to get cryptocurrencies right,” Media Lab Director Joi Ito says. “Brian’s experience mainstreaming emerging technologies from the rural mountains of Nicaragua to the White House will be invaluable as he tackles the challenges of digital currency — one of the most promising emerging technologies for the next 10 years.”

Forde has spent more than a decade at the nexus of technology and public policy. At the White House he was responsible for determining how the Obama administration would leverage open data and emerging technologies to address the president’s national priorities. In this role, his work included launching initiatives in climate change, natural disasters, and open data, and leading the revitalization of Detroit. He was also key to formulating the White House Tech Inclusion and TechHire initiatives, bringing together leaders from the technology community, large corporations, and advocacy groups to support the hiring and training of more women and minorities in technology and using resources as resume templates could be really useful to get hired right away. In recognition of this work, Forde was named a Young Global Leader by the World Economic Forum.

“While at the White House, Brian led extraordinary initiatives to leverage the power of tech and innovation to make the future of America ever brighter,” says Todd Park, White House advisor for technology. “From helping drive efforts to aid the revitalization of Detroit to leveraging emerging technologies to support survivors during Hurricane Sandy, to breaking down barriers to a more diverse tech sector, the impact of Brian’s work will continue to be felt by Americans for years to come.”

Prior to joining the Obama administration, Forde brought advances in technology to Nicaragua, first as a Peace Corps volunteer and then as the co-­founder and CEO of Llamadas, S.A., one of the largest Internet phone service providers in that country.

“As a technologist, there’s no more exciting place to work than the MIT Media Lab,” Forde says. “The innovations that come out of the Media Lab have made a truly global impact. I look forward to working with the faculty and students and collaborating with developers, academics, entrepreneurs, governments, and nonprofits to help us get closer to a more robust and viable digital currency that could have tremendous benefits around the world.”

In launching this digital currency initiative, the Media Lab will work closely with faculty members, researchers, and students across the campus. More information is available at: https://medium.com/@medialab/launching-a-digital-currency-initiative-238fc678aba2