Institute for Education CEO & Founder,  Coach Kathy Kemper welcomed Danny Boice, Trustify Founder and CEO, to the Institute for Education Media and Technology Roundtable dinner at her elegant Wesley Heights home. The dinner, which highlighted the interplay between individual privacy and the nature of an open Internet, elicited wide-ranging and lively debate.

Trustify, which gained national prominence in the aftermath of the 2015 Ashley Madison hack, provided the ability for the general public to search the data dump via public login information. However, the primary focus of the organization is more tailored.

As founder Danny explained, “Trustify connects clients across the United States to a network of highly trained, vetted private investigators” while providing “affordable, confidential, on-demand access to experienced professionals – without the typical $2,000 retainer charged by most traditional private investigation agencies.” Unlike its competitors, Trustify operates independently of the traditional ‘private-investigator’ model through the use of the web as a medium. Dark web searches and other non-traditional methods are used by the organization in their efforts to assist clients. Danny shared, that the old model for private investigators necessitated a technological fix. At the dinner, Boice stated that consumers have used Trustify for a broad range of reasons—from marital infidelity to gaining intelligence on the local dog walker. One area where participants, and Boice, anticipate a surge in demand over the coming years centers on the field of legal research and discovery. The business, he argues, is still in its nascent stage and will likely take off to even greater heights over the coming months and years. 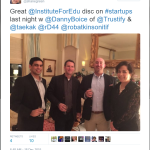 About Our Speaker: Danny Boice is the Founder and CEO of Trustify. Trustify lets consumers order a private investigator on­demand to verify anything or anyone. Prior to Trustify, Danny founded Speek, which patented a new way of doing conference calls without annoying dial­ins and PINs. Speek raised a $5.8M Series A and was acquired in 2015 by Jive Communications. Danny attended Harvard undergrad and previously served as an Adjunct Professor at Georgetown University and Entrepreneur in Residence to the United States. Danny is considered an expert on startups, technology, lean methodology, product and marketing. He has been published or featured in The Washington Post, Wall Street Journal, Inc., Fast Company, Forbes, Entrepreneur, and numerous tech publications like TechCrunch. Danny was also named a Tech Titan by Washingtonian Magazine. Danny and his wife Jennifer Mellon live in Washington, DC with their 5 children. Danny and Jen are both heavily involved in charities and non­profits related to children’s issues, education and/or abuse.