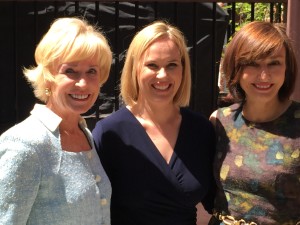 ABOUT OUR SPEAKER: Megan Murphy Bloomberg News Washington bureau chief and executive editor for U.S. government, since September. Murphy previously worked for Bloomberg as a legal affairs correspondent from 2004 to 2007. She had most recently been the Washington bureau chief for Financial Times since November 2014 and had been head of Financial Times’ FastFT since January 2013. For business news coverage, follow Bloomberg News on Twitter.

ABOUT OUR HOST: Long-time Consul General in New York, Maguy Maccario Doyle was appointed Ambassador of the Principality of Monaco to by His Serene Highness Prince Albert II of Monaco on November 12, 2013, and presented her letters of credence to President Barack Obama at a ceremony at the White House on December 3, 2013. She also serves as the Principality’s Ambassador to Canada, having presented her credentials to Canada’s Governor General, H.E. David Johnston, in December 2014, and as the Permanent Observer of Monaco to the Organization of American States. 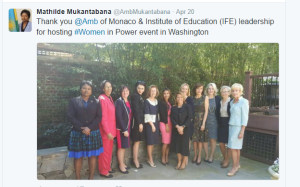 Ambassador Maccario Doyle started her U.S. career at the Monaco Government Tourist Office in New York in 1976 and was appointed Director for North America in 1994. In 1995 Prince Rainier III appointed her as Consul of Monaco in New York, then Consul General in 1997, making her the first Monégasque woman worldwide to hold the position of career consul.
In 1996, Prince Rainier presented her with a “Chevalier de l’Ordre de Saint-Charles” distinction in recognition of services to the Principality of Monaco and the Princely Family.  Her mission as Consul was to reorganize Monaco’s consular representation in the USA and to foster synergy between North American and Monégasque cultural and tourism interests.  Under her direction, the Consulate organized exclusive promotional and philanthropic events and activities to benefit charitable endeavors, many of which were held under the patronage of the Princely Family, including the Prince Albert II of Monaco Foundation-USA and the Princess Grace Foundation-USA. 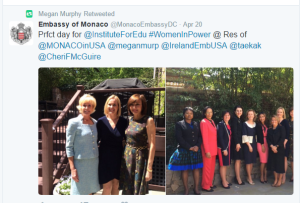 As the Director of the Monaco Government Tourist Office, her responsibilities included the development of leisure and group business travel to the Principality. She also initiated numerous significant cultural and cross-promotional programs including the hugely successful annual “Monaco Takes New York” marketing campaign (which spread to other US cities). In 2007, she was the driving force behind the internationally lauded “A Celebration of Grace” series of events which raised more than $US1.5 million for the Princess Grace Foundation-USA and captured a combined (international) media audience in excess of 140 million. 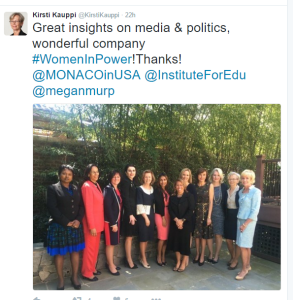 In 2008, Ms. Maccario was appointed by His Serene Highness Prince Albert as Vice President of the Prince Albert II of Monaco Foundation-USA and has since spearheaded many local fundraising and awareness events and partnerships (with, among others, Travel + Leisure magazine, Chicago’s Field Museum, Disney, Tesla, Alliance Française, the American Museum of Natural History in New York and the M.I.T. in Cambridge) and the creation of Monaco’s Environmental Stewardship Gallery, a customized installation depicting the past, present and future conservation efforts of the Principality.
Ambassador Maccario vigorously supports various humanitarian causes. In 1998, she was awarded a gold medal from ALSAC/St. Jude Children’s Research Hospital in acknowledgment of her services toward its international programs and has, since 2004, served on their Professional Advisory Board. In 2011 she was appointed to the International Advisory Council for ALSAC.