Innovation is one of the private-public sector’s hottest buzzwords, and the Institute for Education’s 25th Season Innovation Salon on 6th June at the Dutch Ambassador’s Residence brought together technology experts and ambassadors from around the world to discuss opportunities for technological developments in both the U.S. government and across the globe. 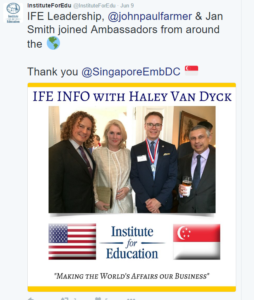 Under the patronage of Ambassador of the Netherlands His Excellency Henne Schuwer, Haley Van Dyck led a discussion on her successful role co-founding the United States Digital Service. A “startup” launched in the White House to make U.S. government services more effective and inexpensive, Van Dyck’s agency has helped bring the U.S. government into the digital age and serves as a model for international emulation.

Welcomed by IFE CEO Coach Cathy Kemper and H.E. Schuwer, Presidential Innovation Fellow Co-Founder and IFE Steward John Paul Farmer introduced Van Dyke as the evening’s guest of honor. Farmer outlined some of Van Dyck’s many successes working for the 2008 Obama Campaign and later efforts that helped rescue healthcare.gov. The most moving testimonials about the star of the evening, however, came from Todd Park, former Chief Technology Officer of the United States. Writing IFE to mark the occasion, Park described Van Dyck “as one of the most utterly brilliant, kindest, biggest-hearted people with whom I have ever worked. Her heart is the size of the Orion Nebula — and I believe that it is the size of one’s heart that is perhaps the biggest predictor of the impact someone will have on the world.” 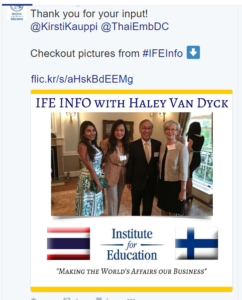 Park’s reference to Van Dyke’s heart and determination to help the world was quickly put to the test as the IFE Innovation Salon transitioned into an energized discussion. Ambassadors from around the world jumped at the opportunity to relay challenges facing their countries and hear advice from Van Dyke, one one of the nation’s top digital experts.

Ambassador for Columbia, H.E. Juan Carlos Pinzón was one of the first to speak and brought up questions regarding technological expansion and the challenges facing governments with rugged terrain and minimal infrastructure. H.E. Pinzón and Ambassador of Thailand H.E. Pisan Wanchana also shared views on corruption and expressed optimism over digitised services offering a gateway for increased accountability within their civil services.

Adding to the discussion, Singapore’s Ambassador H.E. Ashok Mirpuri pointed out his government’s commitment to technology and the fact that his Prime Minister, Lee Hsien Loong, is a proficient computer coder. He questioned, however, whether it was feasible for the Singapore government to fully digitize while serving an ageing population. H.E. Kirsti Kauppi from Finland and host H.E. Schuwer asked whether laws themselves needed to be amended to better facilitate changing technology used to carry out government services. 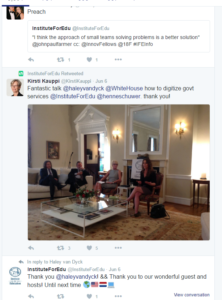 Before closing, Van Dyke addressed their concerns and gave feedback based on her experience with various USDS projects. Pointing out each case has its own challenges, Van Dyke suggests setting realistic goals and taking small, incremental steps is the best way government departments can begin crossing the digital divide. While reminding everyone change cannot happen overnight, Van Dyke suggests digitization is one of the easiest ways for governments to offer faster, more efficient, reliable services to an increasingly technologically savvy world.

About Our Special Guest | Haley Van Dyck: Co-founded the United States Digital Service, a new “start-up” inside the White House building services for the American people that work better and cost less. Launched following the successful rescue effort of healthcare.gov, USDS is bringing the country’s top technology talent into government to fix the highest impact services and reform how our government operates in the digital era. | Meet the US Digital Service | What happens when you disrupt the White House: Haley Van Dyck speaks at TED2016

About Our Host | H.E. Henne Schuwer has been with the Netherlands Ministry of Foreign Affairs for 36 years. Thanks to two previous assignments in the United States, one in Los Angeles and one in Washington, D.C., he has extensive knowledge of American politics and trade issues. | Bio & Resume | Follow @NLintheUSA