The Institute for Education hosted an INFO Public Policy Roundtable on “The Drones are Coming!” The forum included speaker panel moderated by IFE Distinguished Fellow the Hon. Dr. R . David Edelman, Special Assistant to the President for Economic and Technology Policy at the National Economic Council (NEC) and The White House.  Discussion included a live demonstration of drone capability. Over 120 guests attended the forum hosted by H.E. Armando Varricchio, Ambassador of Italy to the United States, at the Embassy of Italy which was held on Monday, July 11th.

“This was an extremely interesting opportunity to hear from experts about Drone technology and how fast it is growing. The panel was able to address the opportunities that are presented by drones as well as to discuss the challenges. There are huge opportunities for UAV’s, for example as proven by the damage control conducted after the earthquake in Nepal, these things are all impressive. The INFO Innovation Salon  was intriguing, interesting, topical, and timely.” ~ H.E. Bjorn Lyrvall, Ambassador of Sweden to the United States

“This event was very enlightening and informative! Unfortunately, most of us associate drones with dramatic events but this panel prepared us for drones to become part of our daily reality. I just hope we can multiply this technology and show the world all of its capabilities.” ~H.E. Vlora Çitaku, Ambassador of Kosovo to the United States

“Drones can be used for security purposes, but also to aid in cases of natural disasters and other emergencies. More than that, I have seen the productive use of drones in agriculture, and my approach would be to find innovative ways to use them to enhance economic growth and development.”~ H.E. Juan Carlos Pinzón, Ambassador of Colombia to the United States

“It was very interesting, in my profession you hear about the military use for drones not so much the civilian side. This event helped me understand how revolutionary this technology is. New dimensions in reality require new regulations which could be challenging. The civilian and humanitarian use of drones is great. I see lots of potential for this technology, it is truly going to revolutionize our everyday life.” ~ H.E. Kirsti Kauppi, Ambassador of Finland to the United States 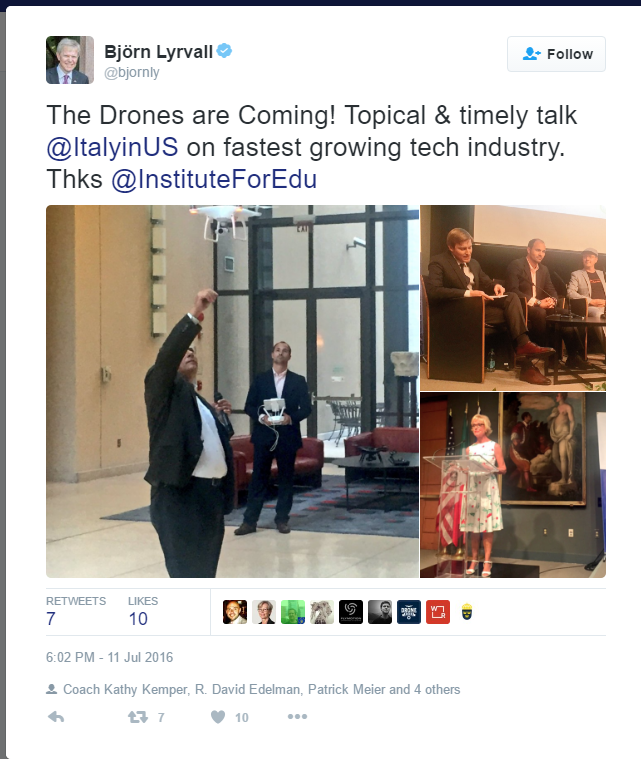 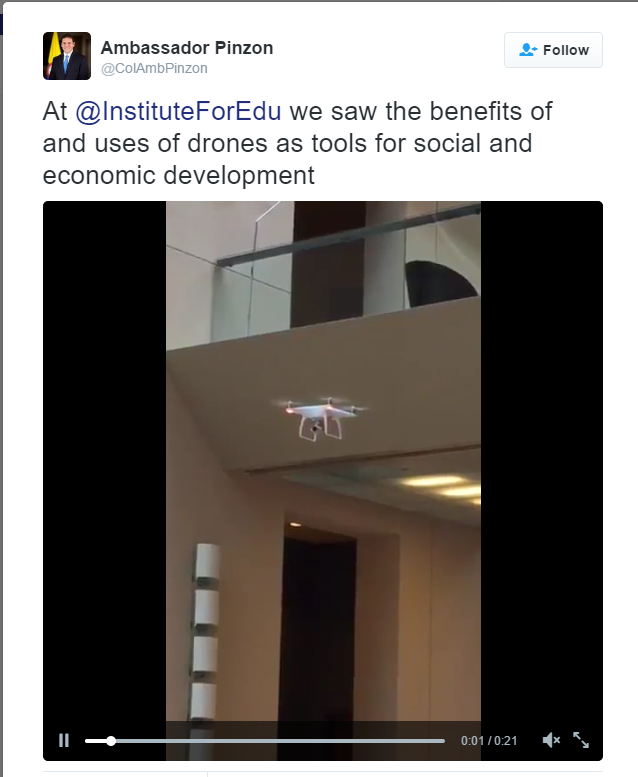 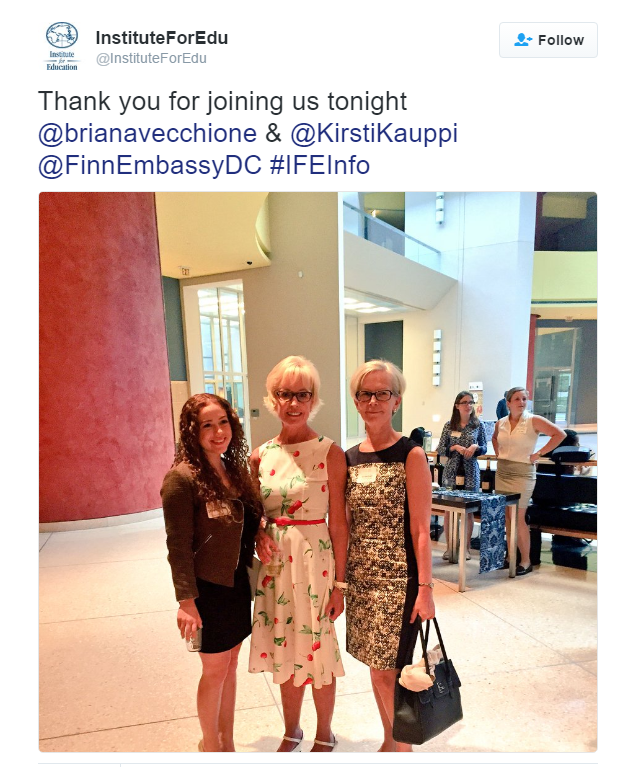 Hon. Dr.  R. David Edelman is Special Assistant to the President for Economic & Technology Policy at the White House’s National Economic Council (NEC). In that role, Dr. Edelman is responsible for overseeing the Administration’s policy development and implementation across a range of economic policy issues including competition/antitrust, broadband/telecom, technology trade, consumer cybersecurity, data privacy, intellectual property, and autonomous vehicles. He previously served as Senior Advisor for Internet, Innovation, & Privacy Policy in both the NEC and the Office of Science & Technology (OSTP), and until 2012, served as the first Director for International Cyber Policy at the National Security Council (NSC).  Throughout his time at the White House he has authored and led the teams implementing over a dozen Executive Orders, national strategies, and Administration legislative proposals, and was the principal architect of the President’s $10 billion ConnectED education-technology initiative, the BuySecure initiative promoting consumer financial cybersecurity, and the Administration’s economy-wide review of competition and antitrust. Prior to his time at the White House, he served at the State Department’s Office of Cyber Affairs; as the United States’ lead negotiator on Internet issues at the United Nations; and began his career as a foreign affairs analyst specializing in the Korean Peninsula, Japan, and China.  Dr. Edelman received his Bachelor’s (with honors) in History from Yale University, and his Master’s and Doctorate in International Relations from Oxford University in the UK, where he was a Clarendon Scholar. Read: DOT and FAA Finalize Rules for Small Unmanned Aircraft Systems

Drones 101: “A beginner’s guide to taking flight, no license needed”

Drone, UAV, sUAS – there are a lot of names for the little (and not so little) flying robots that, over the next five to 10 years, are expected to take over the skies. But there’s no reason to wait until then to immerse yourself in the world of airborne gizmos. Fun and surprisingly useful, UAVs can quite literally add a whole new dimension to your life. Here are the basics of what you need to know to kick off your drone addiction.

And a drone is … what, exactly?

It’s not a stupid question. When people talk about drones, they could mean a whole slew of different things. Technically speaking, a “drone” refers to any unmanned aerial vehicle (UAV) that can navigate entirely on its own through the help of GPS tracking systems. But in the real world, “drone” often means any UAV, some of which have autonomous flying capabilities, many of which do not – but instead are simply “smart” RC helicopters or airplanes. Many of these UAVs have on-board cameras, crash-avoidance systems, and other high-tech settings not available on traditional RC flying vehicles, making them a kind of hybrid between traditional RC fliers and true drones. I, however, use the term UAV and drone interchangeably – sue me.

In the terms of government, police, or military drones, we’re talking about large, staggeringly complex UAVs, operated by highly skilled pilots. Some of these drones, like the Predator or Global Hawk, can carry missiles that kill people – which is one reason many people are “anti-drone.” But that’s a topic for another day. For our purposes, let’s just forget all about these futuristic killing machines for a moment and focus on the fun side of drones.

Okay, so, now we (kinda) know what drones are. How hard are they to fly? It all depends on the specific aircraft. Some are easy enough for your grandmother to get going, others dang near require a computer science degree and a pilot’s license to keep in the air. Luckily, you can start off simple, and move up in complexity (and functionality) as you hone your skills.