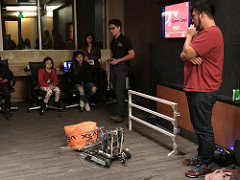 On Friday, February 24th, supporters new and old gathered to hear an update and learn more about CS@SC, the summer coding camps hosted at USC’s Viterbi School of Engineering. Walking into the room on the top floor of Ronald Tutor Hall, two things immediately struck you. The first was the beautiful cardinal and gold sunset shining through the panoramic windows, and the second was the campers laughing and talking as they sat at their computers playing games they built the summer before.

As guests mingled, sat with campers, and watched a demonstration by the USC Robotics Team, it was clear that the camp’s vision resonated with the crowd in the room, but was it also resonating with kids in the local Los Angeles communities like we had hoped? 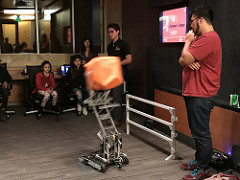 As Professor Miller gather everyone around to begin his presentation, we soon learned that the answer was an emphatic YES! The camp is growing, it is thriving, interest from kids in local communities was off the charts, and the number of kids in attendance more than doubled in the second summer. In addition, the camp was continuing to lead the charge in encouraging underrepresented groups to get involved in the STEM fields. The two statistics below highlight that focus.

On top of these metrics, nearly half of the students were able to attend the camp for FREE thanks to the operating model and the support from our generous sponsors. 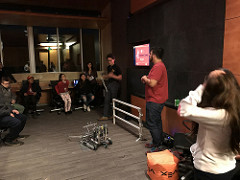 IFE believes that there are future leaders and innovators in every neighborhood, of each gender, and from every ethnicity. The CS@SC Camp provides a vessel for kids to follow their passion and help ensure the opportunity to learn computer science is available to any child with a desire to pursue it. As the Institute for Education embarks on its 26th year, we are very proud to be leading the charge along with one of the great institutions of higher education, the University of Southern California (USC).