HOLLYWOOD ON THE POTOMAC – SOCIAL CHRONICLES | by Janet Donovan

“Well, I have to say it is with some trepidation that I accepted this invitation and that I take the stand before you because I think it is safe to say, there are few things more dangerous than being introduced by somebody who knows you,” said Ajit Pai, FCC Chairman at the Residence of The Ambassador of France in partnership with The Institute for Education and Coach Kathy Kemper for a public policy round-table and dinner.  “I think you’ve seen why that is the case. I fully will own everything about Judge Judy and Tony Kornheiser. I deny all the rest,” he said after his introduction by his wife, Dr. Jannie Van Lancker. 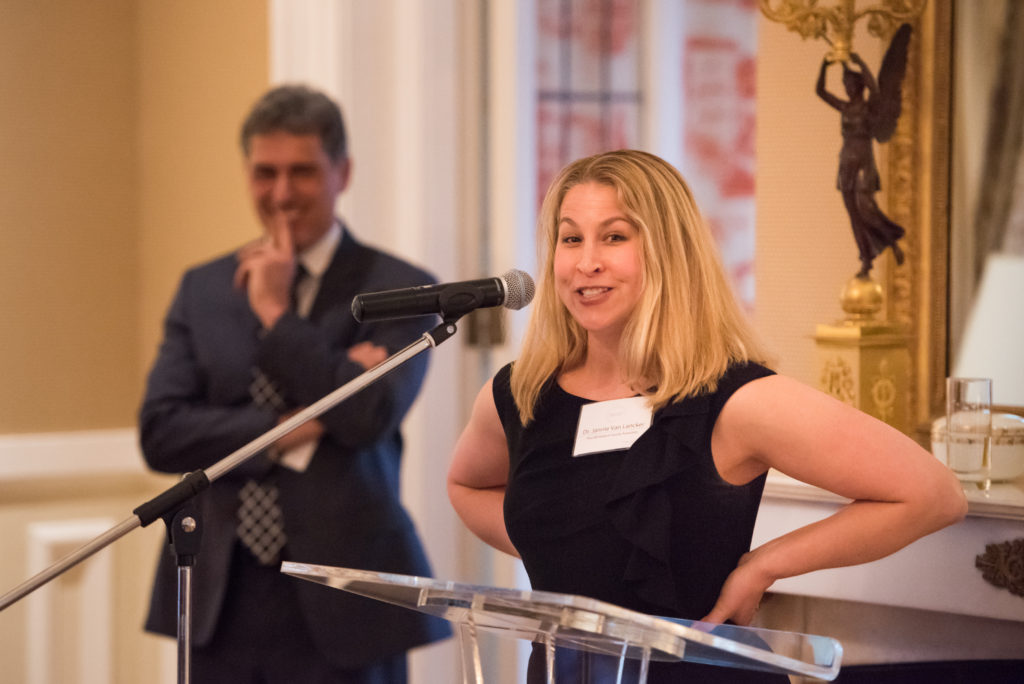 The intro went like this: “He and his mother actually made the pilgrimage to Los Angeles to meet Judge Judy and her bailiff. He got to meet her and the entire crew. That absolutely made his year, ’cause he likes to say he got to visit the highest court in the land. Another favorite pastime of his is listening to podcasts. Now, in fairness, he does say it’s a great way to learn when you don’t have a lot of time. So some of his recent favorites have been The History of Rome or The Tony Kornheiser Show. Now, this seems innocuous enough, but he loves to listen to them at the most inopportune times. For example, try taking a long road trip with him. He is a bad road trip buddy. Maybe it’s just an excuse not to talk; I don’t ask him. My personal least favorite time is when he’s getting ready in the morning and showering. Do you know what it’s like waking up hearing Tony Kornheiser’s coarse voice first thing in the morning every morning?  When I think about Ajit, the qualities that I most want people to know that I don’t think are ever truly portrayed in the media is his kindness and his genuine interest in other people and their stories and situations. I used to be his handler at many social events because we would never leave. Lastly, what I admire most about Ajit is his humor, grace, and bravery, particularly when faced with adversity.” 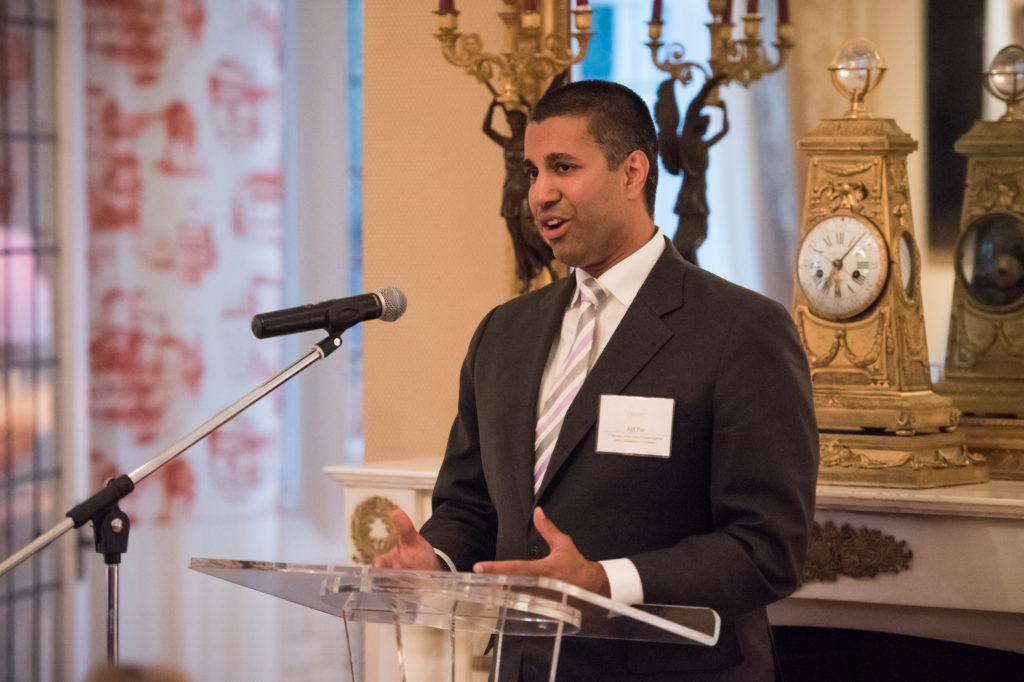 “I think it’s actually quite fitting that we are in the French Ambassador’s residence. When you think about the French values that are encompassed in égalité, liberté, fraternité, each one of those is represented here. Égalité, the fact that each of us comes from a different perspective, we have something valuable to bring to the table when it comes to intellectual conversation. Fraternité, this is what this is all about, building friendship through connections, such as the Institute for Education. And, of course, liberté, the freedom to speak our minds, to disagree agreeably, which, after all, is the hallmark, I think, of a civilized society. I also will say that I feel a personal connection to President Macron. He, many years ago, was a Marshall Memorial Fellow which is a program put on by the German Marshall Fund. They send Europeans to the United States, and the American Marshall program sends Fellows to Europe. I happened to be one around the same time. It was a very useful opportunity for me to understand, in a few weeks, what makes Europe tick. What is important to Europe? What can Europe teach the United States? I would like to think, and this comments about the program, that he feels the same way. The transatlantic relationship is, perhaps, the most important that the United States has; and our friendship with France, of course, is emblematic of that as well.” 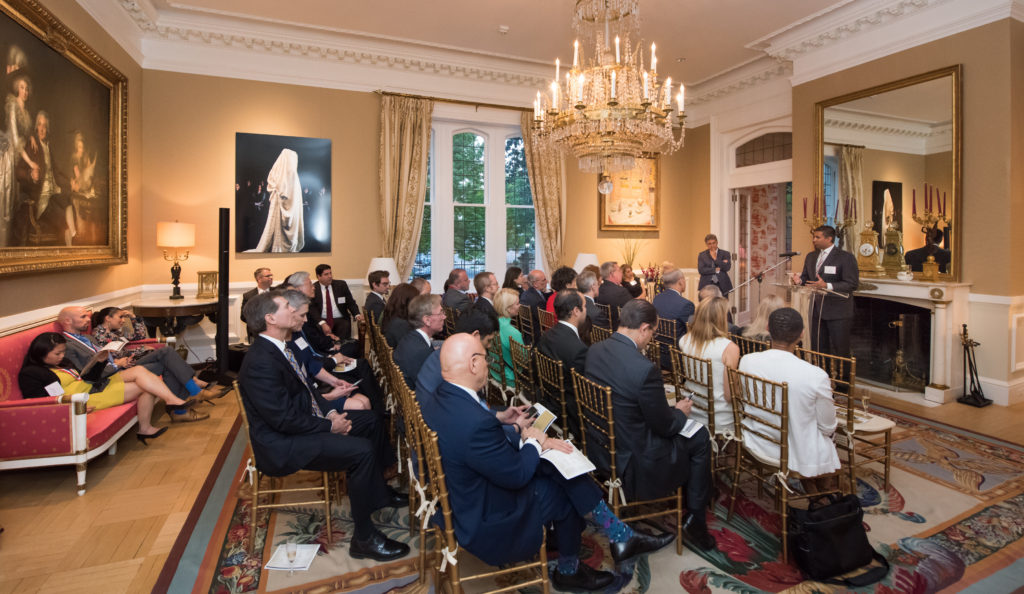 Pai went on to the FCC’s top mission: Closing the digital divide, the gap between those who have access to the internet and advanced technologies, and those who don’t. “In the very first speech I gave on January 24th of 2017 after becoming Chairman to the FCC’s assembled 1400 or so staff, I told them that you have many, many important missions, but there’s none more important than this one because the internet has become increasingly important in everything that we do in our daily lives .I’ll just give you a few stories to explain why.”  He then cited a number of examples of where access is limited. “What is it that the FCC is doing to connect these folks to what I call digital opportunity? I’ll clearly concede at the outset I don’t have all the answers, and there is no easy solution. This is a very large country geographically. We face many demographic challenges. Initially, there’s some terrain challenges. In addition, there are income challenges as well. Nonetheless, the FCC has made it our top priority and we’re doing a few things to tackle this problem that I’d like to share with you tonight. First and foremost, we are making sure that we reform the subsidy programs that we oversee, known as the Universal Service Fund, to target people who are off the grid. So, those are a few of the initiatives we’re working on. There are many more that I’d be happy to discuss, but I did want to let you know that once again, that I appreciate the courtesy that the Institute for Education has extended. I am grateful to all of you for your attention. I apologize for filibustering, as … but nonetheless, if you’re interested in some of our issues, you can always get in touch with me, either here or at my email address, Ajit.Pai@fcc.gov. It’s not a bot answering that email address. It’s actually me.” 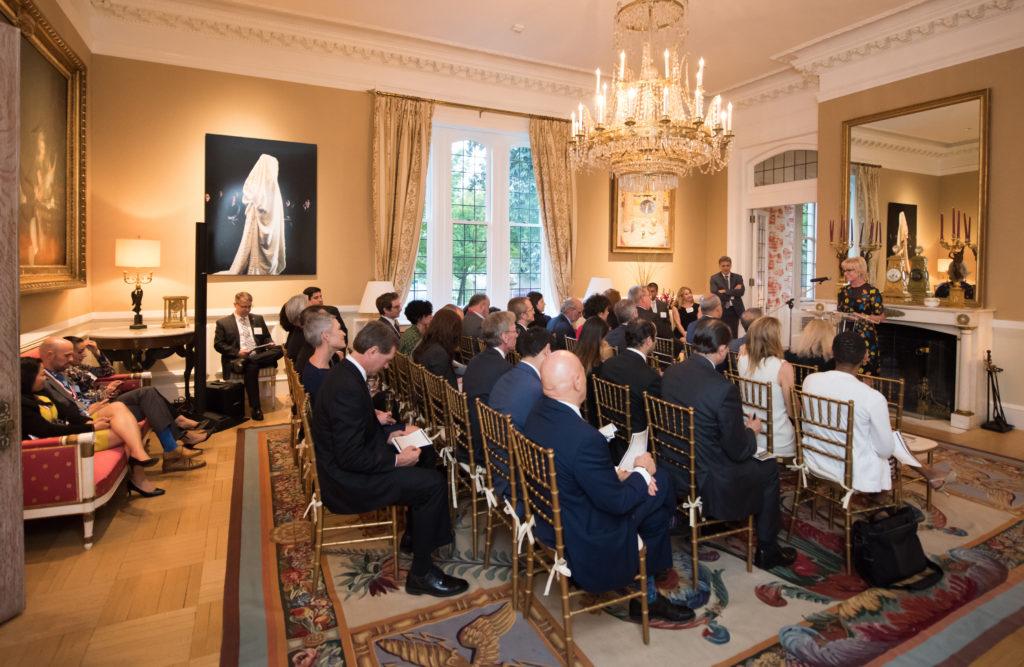 Coach Kathy Kemper at the podium

Coach Kemper instructed us to go to the dining room where each table was headed up by a “Captain” who would be in charge of the conversation at the table and try to get everybody to discuss whatever Ajit talked about and to explore different ramifications of what the FCC does.  Each table was hosted by a media personality. That was followed by a general Q and A that produced some interesting insights such as an application from Kellogg, the cereal company that wanted permission to include a certain kind of screen on cereal boxes. It’d be transmitting wirelessly a video that was connected to an upcoming children’s movie. 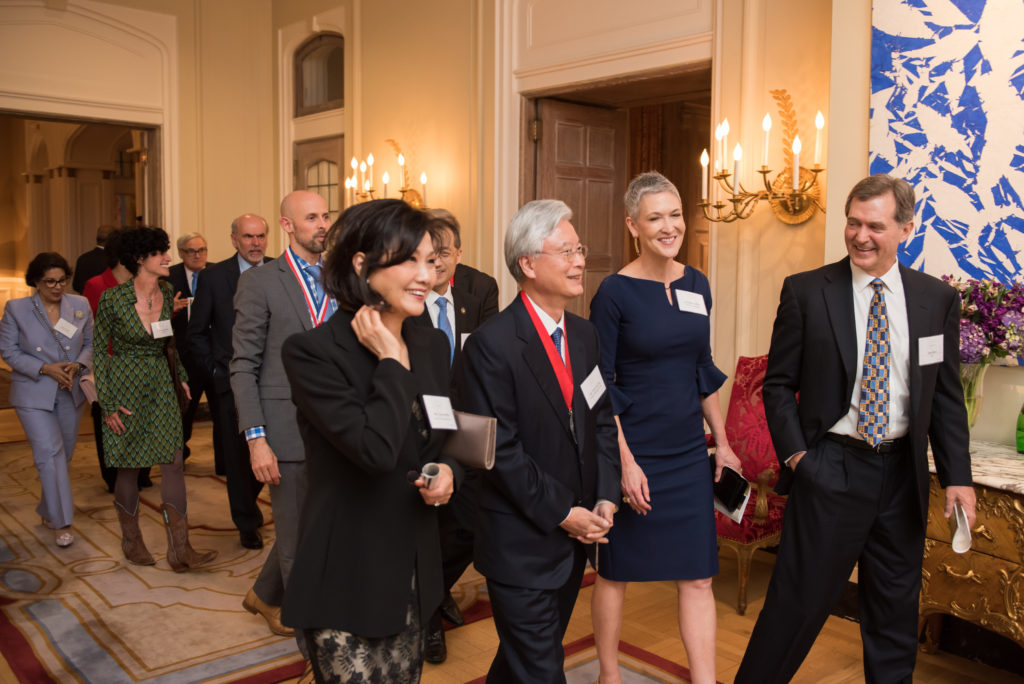