Shannon Bream and Jennifer Griffin, Icons of the IFE Women with Impact Lunch 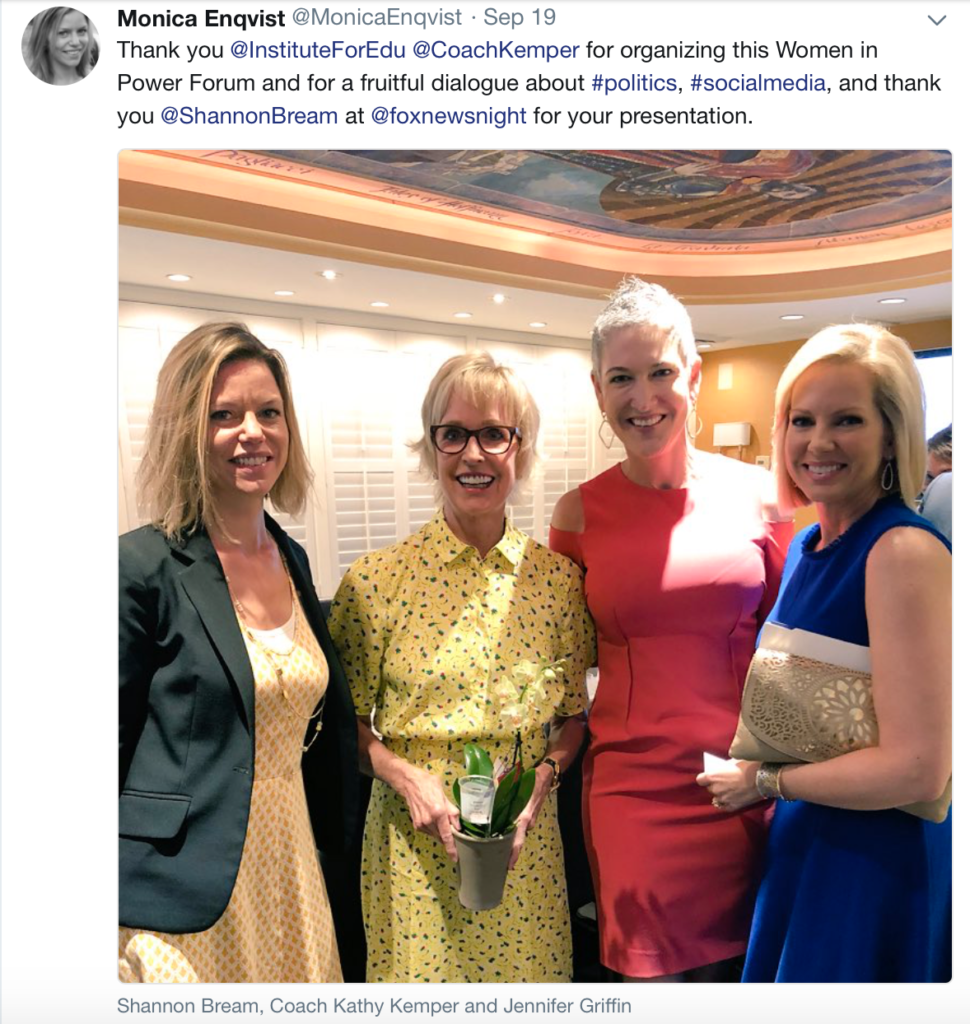 The Institute for Education’s Women in Power roundtable hosted Shannon Bream, Anchor of FoxNews@Night. Jennifer Griffin, National Security correspondent for FoxNews, introduced Ms. Bream. The intimate lunch conversation included an insider’s off-the-record view on “Americans, Politics, and Social Media,” and the influence on the current SCOTUS nomination. The lunch was held September 19th at Café Milano, and while dining on risotto alle zucchine and pollo alla griglia, attendees discussed issues ranging from the historical role of the Supreme Court, to the current chaotic Kavanaugh nomination, to the future of regulating technology.

In organizing this event, Coach Kathy Kemper had asked Justice Ruth Bader Ginsburg and Justice Stephen Breyer which Supreme Court reporters they admired the most, and Shannon Bream was one of the first names that immediately came to mind. It is only fitting that when the room of attendees considered who they thought were the most recognizable Justices in the public eye, Justice Ginsburg, the “Notorious R.B.G.,” immediately came to mind as well. 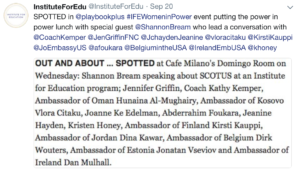 The topic at the forefront of everyone’s mind was discussed: the rapidly unfolding timeline of Brett Kavanaugh’s situation, from the energy and chaos of the day Justice Kennedy announced his retirement, to the disruptions and protests during the hearings, considered the most raucous Supreme Court confirmation hearing process in memory.

Looking at the intersection of politics and social media, the room noted that for voters in 2016, one of the top issues was filling the Supreme Court, and the White House is aware this is still a hot topic for the American public.  The room also noted that the public is clearly divided on social media. As a journalist, Ms. Bream strives to remain neutral and does not offer her own opinions on social media, but the majority of users seem to be different, offering extreme sides of the issue.  With such heavy politicization, people rely on institutions like the Supreme Court to decide, which in turn politicizes Supreme Court decisions and the nomination process.

This idea inspired a discussion on the historical role of the Supreme Court, and the differences between the American system and institutions abroad. Attendees noted that originally the Founders didn’t intend the court to have as large of a role, and the initial allotment of judges was equal, but this has expanded over the years into a more politicized role. The Bush v. Gore decision in 2000 was noted as a possible turning point in politicization. 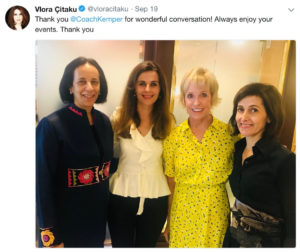 Ambassadors in the room noted how different the media coverage and focus on the nomination process for Brett Kavanaugh and Merrick Garland is from their countries, where Supreme Court nominations and Justices are less at the forefront of the public’s mind. The Ambassador of Ireland wondered how this process could be de-politicized, as this could be important to stabilizing American politics and society as a whole. As it stands now, the hearings offered little more than a circus to watch for viewers, with barely any enlightenment as to the merits or qualifications of the nominee. Term limits have been contemplated as one method, and there is the fact that a Justice can be impeached, but the key to the situation is the Justices themselves. In speaking with the Justices, they want to be seen as judiciously independent from the President who nominated them, and desire to uphold an apolitical reputation.

In terms of moving forward in social media and politics, the Ambassadors of Kosovo, Jordan, and Estonia brought up different issues on mob culture in social media and regulating technology. It was agreed that social media should be used to raise awareness, but users should not give into mob culture. Ambassadors toe a fine line between posting what people want to hear and what needs to be said.  What is most worrisome about mob culture on social media is attempting to silence or shut down other sides, especially as the First Amendment is seen as an American treasure, one which the Supreme Court has defended before in the Westboro Baptist Church’s case. In terms of regulation, it was agreed that the next big conversation will be on the regulation of technology and social media, especially as various technological services are being considered utilities, and authenticity of information is an issue, such as with deepfakes.

As discussions concluded, the room decided no matter the outcome of the Kavanaugh nomination process, what matters at the end of the day is public opinion about the Supreme Court and its reputation as an apolitical, independent institution.  This reputation is strengthened when a Justice votes against the President that nominated them, something attendees agreed is heartening to see and look forward to seeing in future cases, which attendees were told might involve the travel ban, abortion rights, and overall questions of limits on and challenges to executive power.

A special thank you to IFE leadership, David Fenstermaker and Joanne Ke Edelman for their support, and to Cafe Milano for making this event possible.