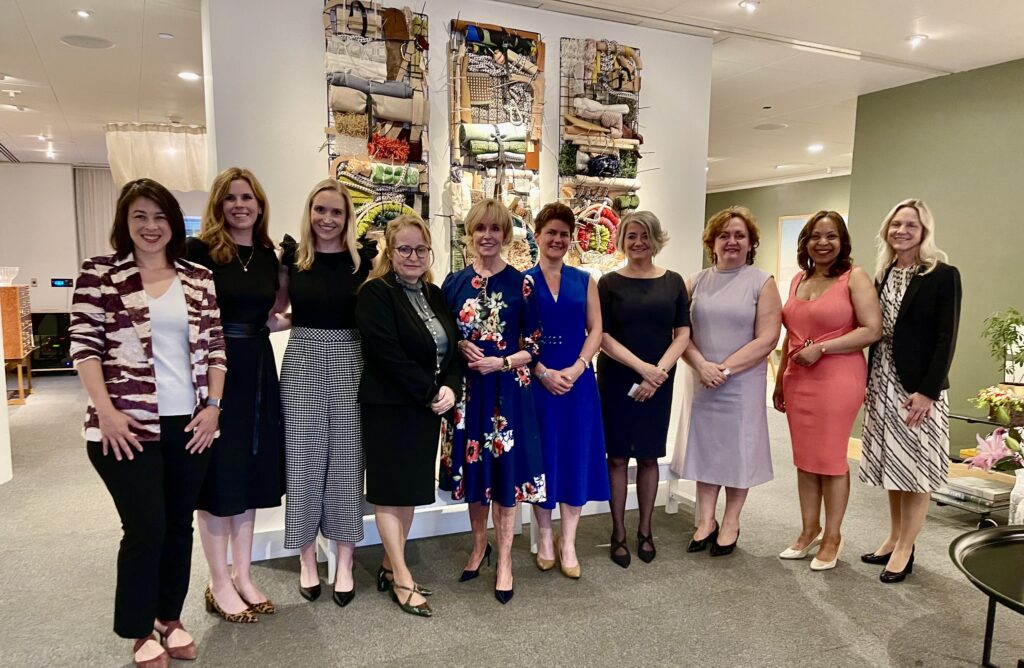 On April 13th, 2022, the Institute for Education, along with the Ambassador of Sweden to the United States, H.E. Karin Olofsdotter, hosted an IFE Women with Impact dinner with special guest Maria Roat, former Deputy Federal Chief Information Officer in the Office of Management and Budget (OMB).

The evening took place at the House of Sweden at the Georgetown Waterfront. The conversation focused on driving digital technology to serve the citizen and expanded to touch on women’s roles in technological innovations, the impact of work from home on collaboration and innovation, and the war on Ukraine.

The evening started with a sneak peek of the current exhibit at House of Sweden entitled Her rights! Money, power, and autonomy. The exhibit explores the ways in which women’s economic equality and autonomy are a prerequisite for all aspects of gender equality.

We moved on to dinner, where Ambassador Olofsdotter welcomed guests and shared background on Sweden’s role in driving innovation and women’s empowerment, including the fact that Sweden was the first country to declare a feminist government and that Stockholm is the second city with the most unicorns per capita after San Francisco.

Coach Kemper then introduced Guest of Honor, Maria Roat, highlighting her career in government and her relentless work in removing barriers to work collaboratively across government agencies to solve problems. Ms. Roat shared that the federal government has so much good and important work going on to drive innovation, but the public doesn’t know about it. One highlight was the insight that NASA was spending 130 hours inspecting the gloves for spacesuits, including collecting data and analyzing it. They then developed AI to make this efficient, and now it only takes five seconds.

The guests then began to discuss how other countries have digitized their economies. H.E. Floreta Faber, Ambassador to the United States from Albania, shared that most public services are online in Albania, which lessens corruption. Dr. Maria Brogren, Head of Innovation and Higher Education Counselor at the Embassy of Sweden, shared that Sweden is now releasing data in collaboration with private companies so that the private companies can help safely build services and solutions. Ms. Roat agreed that to best serve the citizen, and we need to break down silos so that government agencies can collaborate.

Kelsey Valentine, IFE Board of Trustees and CFO