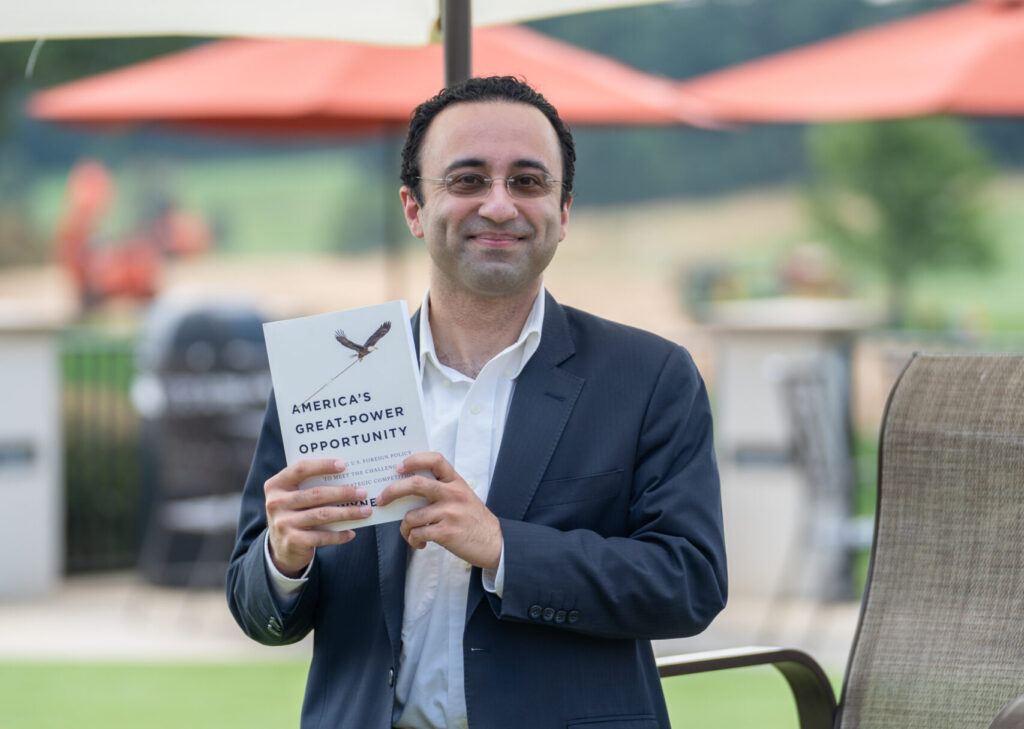 “Competition with China and Russia is a means, not an end,” Wyne reminds policymakers.

It’s hard to avoid talk of great power competition these days, whether it’s in the context of a potential crisis in the Taiwan Strait or the ongoing war sparked by Russia’s invasion of Ukraine.

Ali Wyne explores this latest question in his new book, “America’s Great-Power Opportunity: Revitalizing U.S. Foreign Policy to Meet the Challenges of Strategic Competition.” Wyne, a senior analyst at Eurasia Group’s Global Macro-Geopolitics practice, argues that the United States must not make competition with China and Russia the end-all, be-all of its foreign policy. Instead, the U.S. must stay true to its values and pursue a proactive, rather than reactive, strategy abroad.

You use the word “great power” – not “super power” – in your title. How would you define the difference between the two?

I continue to wrestle with this question – for three reasons. First, as far as I know, there is no universally accepted definition of either term. Second, any such definitions would invariably be subjective, no matter how thoughtfully they are constructed. Third, even if one were theoretically able to articulate objective definitions, one would still have to concede that perceptions of the global balance of power play a substantial role in shaping policymakers’ decisions (hence the distinction that Robert Gilpin posited between “power” and “prestige” in his book “War and Change in World Politics”).

This third reason suggests that the most consequential form of competition between the United States and China may well be narrative: if “middle powers” (another subjective term, of course) believe the Chinese leadership’s assessments that the former is terminally declining while the latter is inexorably resurgent, they will likely adjust their foreign policies to reflect those judgments – whatever the analytical merits. That the cover of a recent issue of Foreign Affairs asks “What Is Power?” demonstrates how impoverished our understanding of this foundational concept remains.

One of your arguments is that great power competition does not amount to an overarching foreign policy strategy. Indeed, there’s a tendency at times to view every bilateral relationship the U.S. has through the lens of competition China or Russia. How can U.S. policymakers avoid making such a mistake while also ensuring that separate bilateral relationships add up to a greater whole?

There are two basic steps that policymakers should take. First, they should try and right-size the competitive challenges that China and Russia present, neither diminishing nor aggrandizing them. Beijing and Moscow are formidable, multifaceted challengers, but they are manageable by virtue of being self-limiting. China is stimulating growing resistance among advanced industrial democracies with a counterproductive course of diplomacy that it intensified shortly after the onset of the coronavirus pandemic, and Russia has committed an extraordinary act of strategic self-sabotage with its invasion of Ukraine. The more the United States loses confidence in its capacity for competitive renewal, the more likely it will be to formulate a foreign policy that revolves around reacting to China and Russia – and to structure its interactions with allies and partners around those reactions.

Second, policymakers should try and articulate more clearly what objectives the United States seeks to accomplish in its foreign policy, keeping in mind that competition with China and Russia is a means, not an end. A succession of shocks – the coronavirus pandemic and Russia’s invasion of Ukraine – has placed in stark relief the imperative of our time: to construct an order that can more effectively manage great power frictions and transnational challenges while avoiding the kind of catastrophic war that has historically birthed new orders. Washington should conceptualize, strengthen, and sustain its bilateral relationships in the service of that objective. Still, even as it will understandably devote most of its energy to building relationships with like-minded countries, it should recognize that it will find it difficult to advance its own vital national interests if its ties with Beijing and Moscow deteriorate indefinitely.

The United States has embraced that call and should continue doing so, for multilateral structures that do not adjust to reflect the evolving balance of global power will only grow more ossified and lose more legitimacy. Washington and Beijing will, of course, propose to operationalize that reform in different ways – as will middle powers, which do not want to be reduced to spectators within a G-2 world.

In addition to competing to shape existing structures, the United States and China will both seek to cultivate influence through new initiatives: consider AUKUS and the Indo-Pacific Economic Framework for the former, the Global Security Initiative and the Belt and Road Initiative for the latter. Washington and Beijing will also work to reinvigorate and repurpose existing groupings: consider the Quadrilateral Security Dialogue for the former, the Shanghai Cooperation Organization for the latter.

President Biden’s recent trip to Saudi Arabia sparked much debate over the role of human rights advocacy in U.S. foreign policy. How should human rights and democracy factor into the United States’ “great power opportunity”?

As is often observed, the power of America’s example is at least as important to its external competitiveness as the example of its power; witness the global reverberations of its #MeToo movement and its ongoing reckoning with racial injustice. While China and Russia often elicit condemnation when they commit human rights abuses, they rarely elicit disappointment, for few, if any, observers expect either of them to serve as moral exemplars. When the United States takes steps at home and abroad that violate its stated ideals, observers criticize it because they believe that it should behave differently and that its actions continue to carry moral weight; those expectations are as much a blessing as they are a burden.

When Beijing and Moscow accuse Washington of violating human rights, Washington should not betray defensiveness. Instead, it should note that, unlike in China and Russia, where those who criticize government actions are swiftly censored, if not severely punished, activists and nongovernmental organizations in the United States regularly and vigorously air such criticism. More importantly, it should continue demonstrating its capacity to address its moral shortcomings, however haltingly. During the Cold War, Washington’s most potent response to Moscow’s accusations of hypocrisy was not to document the Soviet Union’s human rights abuses, but instead to pass Supreme Court cases (such as Brown v. Board of Education) and bills (such as the Civil Rights Act) that affirmed a commitment to redressing its imperfections.

The Biden administration has listed “investing in the foundations of our strength here at home” as the first pillar of its China strategy. Your book also makes the case that, rather than reacting to moves by China (and Russia), the United States must focus on renewing its core strengths. How would you assess the Biden administration’s performance in that direction thus far?

The Biden administration has achieved three major legislative victories that should spur U.S. economic renewal over the medium to long run: the $1.2 trillion Infrastructure Investment and Jobs Act; the $280 billion CHIPS and Science Act, which includes $52 billion to stimulate domestic semiconductor manufacturing; and the Inflation Reduction Act, which commits $369 billion to clean energy initiatives, the largest such investment by the federal government.

These accomplishments reflect America’s longstanding ability to leverage competitive anxiety in the service of internal renewal. But that anxiety should not be a crutch: The United States should not depend on invocations of China and Russia to reinvigorate its economy or address its myriad socioeconomic challenges. Nor should it hope that such invocations will overcome America’s increasingly entrenched political divisions, which are affecting both the ability of the government to function and the willingness of Americans to make common cause.