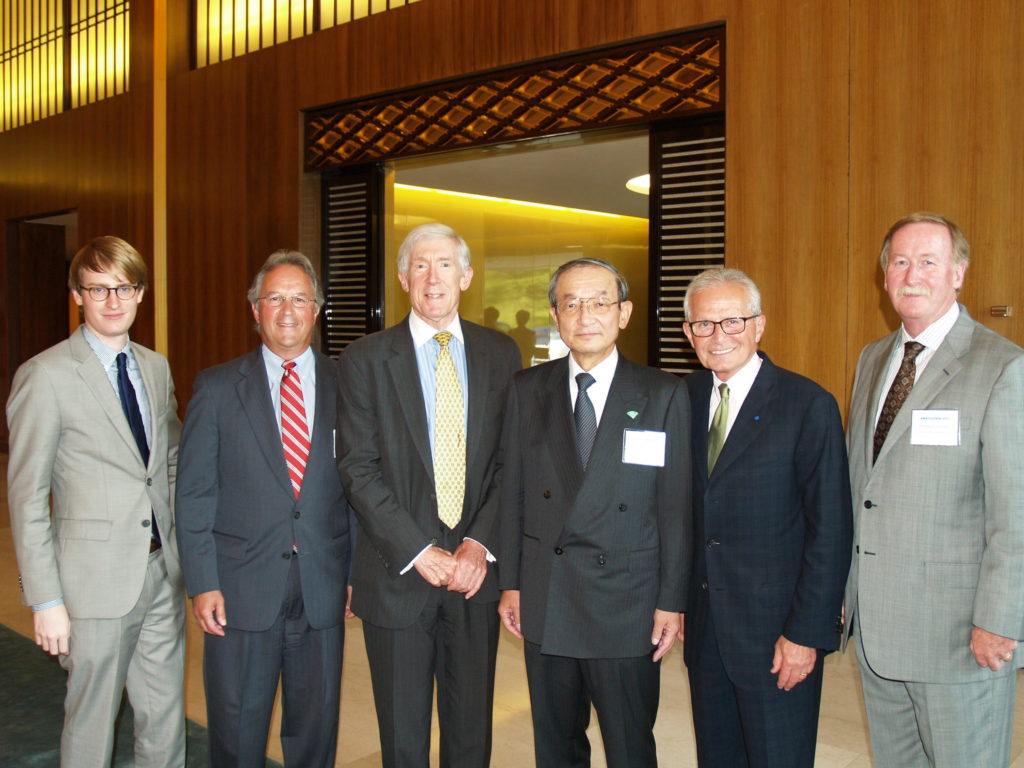 On July 9, 2013, the Institute for Education (IFE) convened a unique group of leaders across the private and public sectors to grapple with the promise and challenges of progress in intelligent transportation systems (ITS). His Excellency Hirochiro Sasae, the Japanese Ambassador to the United States, hosted this second annual forum with Mr. Yashushi Akahoshi, Minister for Economy, Trade and Industry presiding..  Led by Christopher Caine, IFE Steward and President and CEO of Mercator XXI, the roundtable featured presentations from 2013 ITS World Congress Chairman and Toyota senior technical executive Hiroyuki Watanabe, U.S. Under Secretary of State for Economic Growth, Energy and the Environment Robert Hormats, GEICO President & COO William Roberts, White House Senior Advisor for Internet, Innovation and Policy R. David Edelman and former IBM Executive Vice President Nicholas Donofrio.

Whether in the realm of vehicle-to-vehicle communication, “big data” aggregation of information from individual cars and from transportation infrastructure, personal identity management, or autonomous, self-driving cars, there was broad agreement that intelligent transportation systems promise to revolutionize the way we live, work and play.

The evening began with an elegant reception and dinner offering an assortment of sushi and other Japanese cuisine at the Residence of the Japanese Ambassador. The program began with introductory remarks by Mr. Caine. Minister Akahoshi then welcomed participants on behalf of the Ambassador and thanked Mr. Caine.

Dr. Watanabe began the program  with his keynote presentation that offered innovation-driven comparisons to the invention of the automobile, the advent of the electric starter in the early 20th century, and to the creation of national highway systems.  Mr. Roberts evoked the introduction of antilock brakes.  Mr. Edelman presented data showing that robust adoption of intelligent transportation system technology could save thousands of lives each year, reduce carbon emissions and restore 1.2 billion hours of work lost to commuting each year.

As with past transformative innovations, the potential effects of ITS are vast.  And a core theme of the evening – reflected in the diverse backgrounds and expertise around the table – was that these effects are also cross-cutting.  Just as ITS’ impact is multi-sectorial, with benefits for human productivity, automotive safety, and the environment – its challenges and implications are likewise broad.  And participants agreed that moving ITS towards wide adoption is not merely a technological proposition. It will require top down and bottom up policy approaches.

Dr. Watanabe emphasized the critical role of infrastructure build-out, collaboration across sectors and citizen involvement.  He pointed to a successful project in the wake of Japan’s devastating 2011 tsunami that combined traditional transportation data from infrastructure sensors with data collected from individual vehicles to create a picture of what roads were clear and usable.

Under Secretary Hormats warned against the balkanizing effects of “innovation nationalism” and the importance of building standards that reach across borders so that the benefits of ITS technology can cross borders as well.  Mr. Roberts addressed the question of insurance – in his words, whether “the gecko will be there”.  This, he said, will hinge on pricing the replacement of damaged ITS systems from an actuarial standpoint, and assessing who (or, what) is at fault in accidents involving autonomous, partially autonomous or ITS-assisted driving.  He also emphasized that a central aspect of achieving wide adoption is consumer trust in ITS systems and the availability of aftermarket upgrades of existing vehicles to new ITS technologies given the large numbers of current vehicles that will operate for many years to come.

Mr. Edelman surveyed the policy implications of ITS adoption, noting that they spanned far beyond transportation to privacy, energy and beyond – even to national security.  And Mr. Donofrio emphasized that the lesson of the last 50 years in technology is that there is no one “big thing” – that success will come from navigating a host of innovations.

Clearly, the cross-cutting nature of ITS, and the public policy and social implications of their adoption are broad – even daunting.  This led one participant to question whether the U.S. government in its current gridlocked state, is capable of the coordination necessary to shepherd these technologies into the marketplace.  But the roundtable discussion made it clear: that even if the exact nature of transformative technological change can’t be predicted in advance, a tremendous economic and societal benefit lies ahead for countries and communities willing to understand and embrace this exciting moment of innovation.