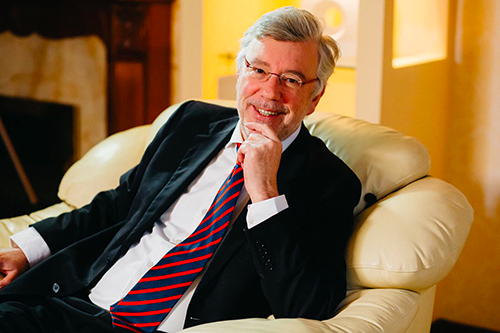 The Institute for Education (IFE) welcomes H.E. Jean-Arthur Régibeau, Ambassador of the Kingdom of Belgium, to the Capital City!

We are pleased to announce that Ambassador Régibeau has graciously accepted the distinguished position of IFE Diplomatic Steward, continuing the legacy of his predecessors. We look forward to his contributions in the diplomatic arena in DC and his partnership with the IFE community.

ABOUT OUR DIPLOMATIC STEWARD: After a few years of working for private businesses and later as a legal advisor, Jean-Arthur Régibeau joined the Belgian Ministry of Foreign Affairs in 1998. He was the diplomatic advisor to the Minister of Defense from 1999 to 2002 and he went on to be First Secretary at the Belgian Embassy in Berlin. From 2003-2007, Mr. Régibeau returned to Brussels as Head of the Private Office of the Minister of Defense. In 2007, he was appointed Director general in charge of Multilateral Organizations at the Foreign Ministry. In this capacity, he managed some aspects of the Belgian presidency of the European Union in 2010. From 2012-2016, he also was Deputy Commissioner for the commemoration of World War I. In 2016, he took up his role as Ambassador to the Russian Federation, Armenia, Belarus & Uzbekistan. continue reading →

For the past 12 years IFE has had the honor of partnering with the Embassy of the Kingdom of Belgium and their Ambassadors who have generously opened their home to dozens of IFE salons and dinners. In addition to graciously hosting special guest speakers, they have also attended IFE programs  throughout the Capital City lending their voice and valuable perspective to the conversation.

Events hosted over the years include: